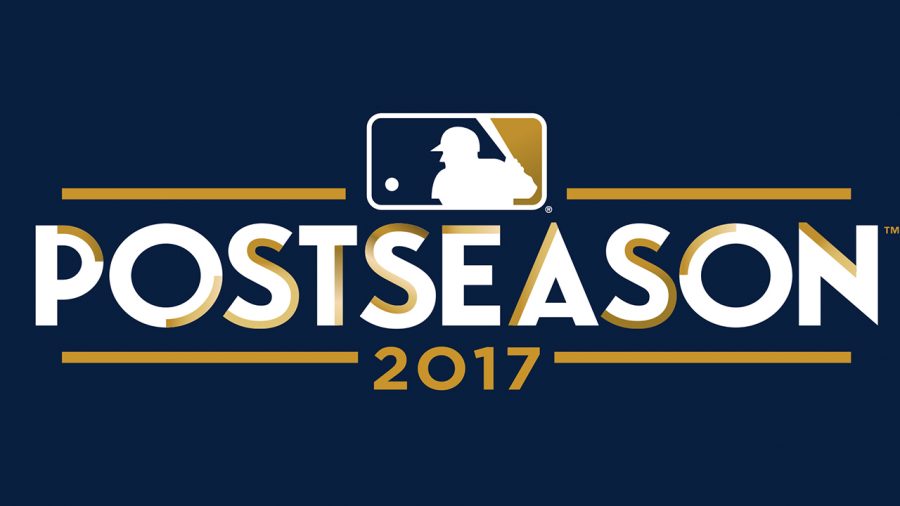 The days get shorter, the weather gets colder, the coffee switches from iced to drip, and the anticipation for Postseason baseball reaches its crescendo–it must be October. Here is everything you need to know about the 2017 Major League Baseball postseason. (including student predictions!)

The first seed Dodgers will enter the postseason with the best record in the League after finishing the regular season with 104 wins, securing home field advantage throughout the postseason–including the World Series. Clayton Kershaw, Yu Darvish, Rich Hill, and Alex Wood will command the mound for the Dodgers with a number five starter yet to be named. With exceptional pitching and offensive help from Cody Bellinger, Corey Seager, and Chris Taylor, expect the Dodgers to play deep into October.

NLDS UPDATE: The Dodgers swept the Arizona Diamondbacks in the National League Division Series, winning three straight games. The Dodgers will now play the Chicago Cubs in a National League Championship Series rematch. Last postseason the Cubs eliminated the Dodgers in the NLCS, and would later go on to win a World Series title. Undefeated in this postseason, the Dodgers look to secure a ticket to the World Series for the first time since 1988, the only thing standing in their way is the reigning champions.

NLDS UPDATE: In a grueling five-game series, the Nationals brought the game back home in an attempt to end their postseason curse. Since moving towns and switching names, from the Montreal Expos to the Washington Nationals, the Nationals have never advanced to the second round of the postseason. This was not the year to break the streak, the Nationals fell to the Cubs in game five. Expect to see some Nationals on the golf course because there season is over.

The 2015-2016 season was the season. The Chicago Cubs ended a 108-year championship drought in the most “cub way” possible – an extra-inning, rain-delayed away game. The Cubs began this season with a championship hangover; it wasn’t until the Midsummer Classic when the Cubs began to look like the team they were in their championship season. Jake Arrieta and the crew will face the Washington Nationals’ one-two-pitching punch of Scherzer-Strasburg with an offense led by hot hitting Kris Bryant. Will this Cubs team navigate the postseason to a back-to-back World Series victory? In the words of Manager Joe Maddon, “Just try not to suck.”

NLDS UPDATE: The Chicago Cubs have set the date for a Championship Series rematch with the Los Angeles Dodgers. The Cubs defeated the Nationals in a riveting game five, played on the road, to advance to their third consecutive Championship Series appearance. Can the Cubs’ offense out play the Dodgers elite pitching staff? Buckle in, the National League Champion Series is going to be one for the history books.

The Cleveland Indians tasted victory last season in a game seven, rain delayed World Series, but their crown was stolen in a 10th inning run by the Chicago Cubs. After opening the season in the shadow of a World Series loss, the Indians recovered to make 2017 an unforgettable season. Manager Terry Francona utilized the talents of his veteran players along with prompting many AAA players to create a team that would win 22 consecutive games. The Cleveland Indians closed out the regular season on a high note and hope to continue the positive trend throughout the postseason as they attempt to bring home the gold.

NLDS UPDATE: The 2016 World Series runner-ups missed their chance of a second shot at a championship title. The Indians succumbed to the Yankees in game five of the American League Division Series. The Indians were a favorite to win the Title, yet, poor pitching and a strong Yankees offense lead to the end of their season. Welp, there’s always next year, Beliveland.

The Houston Astros are the team to watch in the American League Division Series. Jose Altuve, George Springer, Dallas Keuchel, and the recently acquired Justin Verlander dominated the regular season, virtually clocking in Houston’s postseason ticket in mid-June. Watch out opposing pitchers! The Astros lineup is stacked with players whose OPS is 100+ with a team average strikeout rate of 17.2%. Even with a strong offensive lineup, the Astros also carry a star-studded pitching staff. At the trade deadline, the Astros acquired right-handed pitcher, Justin Verlander to compliment the Cy Young award winning pitcher, Dallas Keuchel. The 2017 Houston Astros are a tough team, but can they overcome last year’s World Series runner-ups? Any series The Astros are in is going to be one for the history books.

NLDS UPDATE: The Houston Astros continued their regular season reign in the postseason , eliminated the Boston Red Sox in four games. Unlikely hero, Josh Reddick lead Houston to an offensive victory along with other hot hitters, Jose Altuve and George Springer. The Astros will take on the New York Yankees in their pursuit of a spot in the World Series.

The Boston Red Sox know how to start and finish a game. Strong starting pitchers such as Chris Sale and Drew Pomeranz pitch to perfection to hold batters until strikeout master Craig Kimbrel comes from the bullpen to close the game. Although the Red Sox have had a rocky season, they have achieved their postseason goal of knocking out the New York Yankees to secure the American League East title and a spot in the Division Series. The Red Sox’s regular season concluded with a win percentage of .574 while their Division Series opponents, the Houston Astros, finished with a .623 win percentage. On paper the Red Sox are the underdog, but with a little Fenway magic the Boston Red Sox are ready to rock the postseason.

NLDS UPDATE: The Red Sox gave their max effort in the National League Divison series with their young team. Only winning one game, the Red Sox avoided a sweep with a 10-3 victory in game three yet fell to the Astros the following game. The Red Sox will pack their bags with a little extra baggage: postseason experience for a young team.

NLDS UPDATE: The Arizona Diamondbacks earned their spot in the National League Divison Series with a win in the Wild Card game against the Colorado Rockies. In three consecutive games, the Diamondbacks battled the Dodgers in back-and-forth high-scoring games but could not produce a win. The Dodger won two at home, sending the series to Arizona with ace, Zack Greinke on the mound; but still the Diamondback could not spark a successful inning leading to a Dodger victory and the Diamondbacks packed their bags for a long winter.

The New York Yankees set a goal in the beginning of the season to return to the postseason after a season’s hiatus. The Yankees rotation is stacked with power hitters: Aaron Judge, Gary Sanchez, DiDi Gregorius, and Todd Frazier. Aroldis Chapman returns to the Bronx after winning a World Series with the Cubs, in hopes to bring a championship to the Empire State. The Yankees battled past the Minnesota Twins in a action-filled American League Wild Card game clinching a spot in the American League Division Series in a 8-4 win. The victory clocks the team a ticket to Cleveland, Ohio to take on the Cleveland Indians on Thursday, October 5th as the New York Yankees look to regain their championship reign.

NLDS UPDATE: The New York Yankees surprised the League when they defeated the Cleveland Indians in game five of the American League Division Series. The Yankees brought the heat with help from Aaron Judge, Gary Sanchez, and Didi Gregorius who hit the game-winning homerun in the Wild Card Game and two home runs in game five of the ALDS. Keep your eyes on the Yankees because they’re on a roll and ready to take on the Houston Astros.