“How to Be an Antiracist” sparks insightful conversations with antiracism 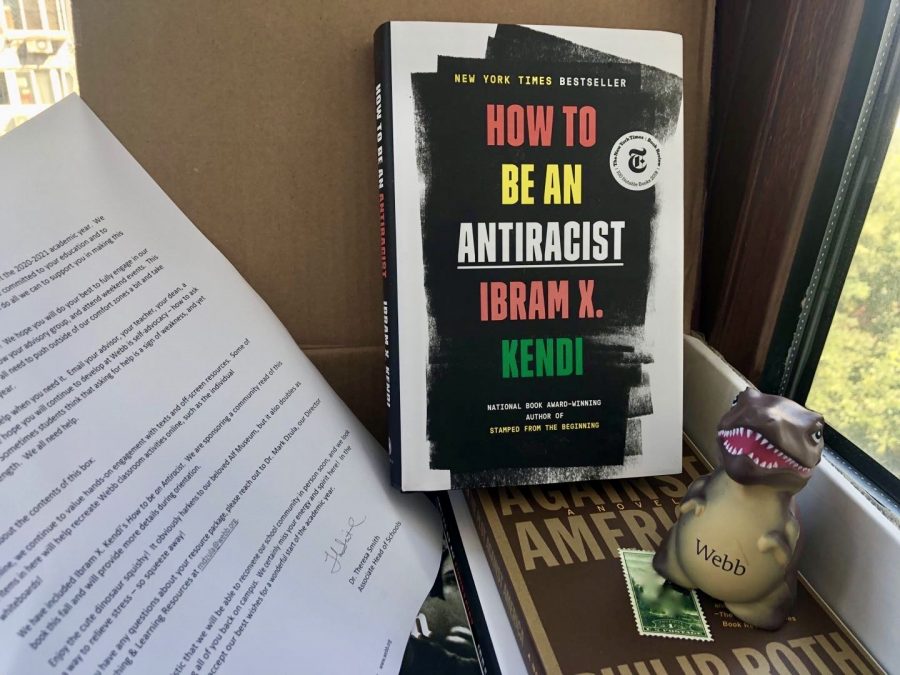 As a community dedicated to celebrating diversity and fighting racism, Webb did not remain silent in the midst of recent protests against racial inequalities. Witnessing racial profiling in society, many students started doing what they can to promote justice over the summer. As the school year begins, the school has selected Ibram X. Kendi’s How to Be an Antiracist as a community read.

Before the start of the school year, each Webb student either picked up or received a packet of academic supplies. In the box was a small dinosaur stress reliever, a letter from Webb, different readings for Humanities courses, and How to be An Antiracist, a book that found its way to all Webb students and faculty members this school year. As the subject of Webb’s community read, this book provides important insights and wisdom to the Webb community.

How to Be an Antiracist is a handbook that combines memoir, storytelling, rhetoric, and persuasion. It tackles one of the most pressing societal issues from various angles, providing audiences with insights into the roots of racism, as well as ways to combat oppressive systems. The antiracism handbook challenges misconceptions, using its wit and power to initiate change. Ibram X. Kendi, a great activist himself, uses words as weapons to accurately diagnose racism—a disease like cancer.

The book is very well-structured. Kendi manages to find the balance between storytelling and educating his audience, meanwhile never boring his readers. The poignant stories, whether as a young African American boy or a sophisticated professor, all support the arguments that Kendi makes from a personal level.

For example, he acknowledges, “being an antiracist requires persistent self-awareness, constant self-criticism, and regular self-examination,” and he demonstrates the very qualities in his writing. Kendi challenges the idea that only whites can be racist and uses himself as an example of the inferiority complex: when people of color think less of themselves, he explains, they are more vulnerable to racist ideas and can become racist themselves.

The definitions and persuasive elements in the book allow the personal narratives to stand out, creating a unique style and recognizable format in the book.

Kendi delivers his messages with comprehensive and easily understood definitions of key terms (such as racism, antiracism, activism, etc.). The definition not only incorporates his unique insights, but also explains the logic of things very well. For example, when defining activism, Kendi stresses the importance of policy and power shifts instead of simple changes in minds and feelings, encompassing his understanding of activism in the definition.

In each chapter, Kendi discusses one aspect of racism. When delivering the messages on ethnicity and race, for example, Kendi writes that

The listing accurately points out the roots of the problems and ways to address them.

In the definitions, solutions, as well as his reflection on his past, Kendi demonstrates a comprehensive understanding of racism, constantly addressing common misconceptions people have that stagnate progressive efforts. As he emphasizes the importance of changing policy, he explains that it is a common mistake for people to blame the deficiencies on individuals, which is problematic. Kendi also denies the common association of racism with fear and ignorance, but endorses self-interest as the core of racism, further supporting his solution of policy changes.

Throughout the narrative, Kendi exemplifies thorough introspection as well as self-growth from a racist to an antiracist, acknowledging his mistakes in the past and using them as sources of wisdom. Kendi can carry humility and pride at the same time: while he humbly faces his past and identifies his mistakes, he never loses pride as an African American.

The book encompasses diversity, inclusivity, intersectionality, and complexity. Kendi devotes each chapter to discuss the intersection between race and biology, ethnicity, body, and many more. In many of these cases, he rescinds from his privilege as a heterosexual male to empathize with other social groups, understanding their identities and struggles.

His ability to acknowledge privilege and expand the conversation to discussing other domains related to race strengthens his arguments in the book. In the chapter on sexuality, for example, he writes, “queer antiracism is equating all the race-sexualities, striving to eliminate the inequities between the race-sexualities. We cannot be antiracist if we are homophobic or transphobic.”

The analogy of racism as a form of disease that requires imminent and correct cure is also powerful, especially as a way to conclude the book.

Kendi believes that “our world is suffering from metastatic cancer.” Racism, like cancer, spreads at a rapid speed, intersects with various bigotry as discussed above, and threatens the lives of people. Importantly, similar to removing a tumor to cure cancer, combating racism requires immediate eradication of oppressive and discriminatory policies.

As the concrete solutions testify, the book is a hopeful one. It lies in the perfect spot between optimism and reality. Behind the well-explained solutions, the clear reasoning backs up the practicality of those solutions. Unlike Between the World and Me, How to Be an Antiracist entails a hopeful outlook that empowers the audiences.

Instead of triggering feelings like sadness and outrage, it is a book that makes the audiences think, and feel informed and empowered. Kendi’s belief that racists and antiracists identities are flexible alludes to the hopeful nature of the book, because despite institutional system, “what we say about race, what we do about race, in each moment, determines what — not who — we are.”

As a touching memoir, analytical tutorial, and informative handbook, How to Be an Antiracist opens doors to a world of fair policies and equality that we should all strive for as members of the Webb community. Encouraging humility and advocating for empathy, the book impacts communities and beyond. As Webb students, we should all be reading the book and engaging in thoughtful conversations as antiracists.

Note: Dr. Mark Dzula, the adviser of the Webb Canyon Chronicle, was on the group that chose the community read.