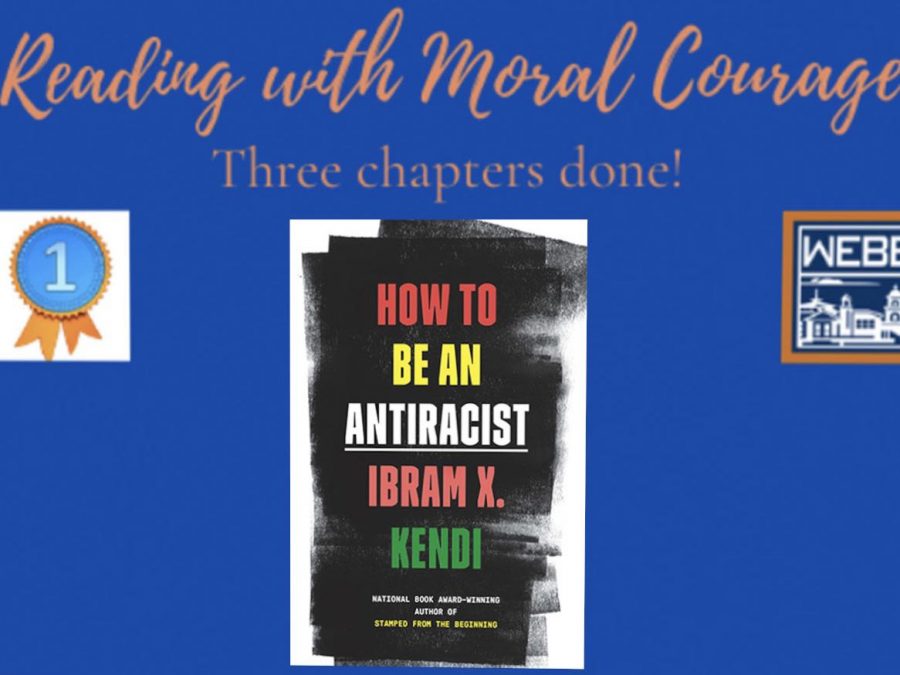 Webb community members discuss Kendi’s How to be an Antiracist during the first community read event.

With the battle against institutional racism raging across the nation, Webbies did not hesitate to make their own strides toward racial equality. While COVID-19 has delayed the students’ return to Webb’s campus, it has not stopped the community from coming together and confronting these issues head–on.

On September 29th, almost 100 members of the Webb community gathered on Zoom for the first community read event, which focused on the first three chapters of How to be an Antiracist by Ibram X. Kendi. During the meeting, students and faculty members engaged in vibrant conversations on controversial topics and shared their experience while reading the book.

The meeting started with an introduction given by Mr. John Choi, Diversity, Equity, & Inclusion Coordinator, who gave important insights on discussion norms and principles for facilitating an effective dialogue. Then, the attendees were sent into smaller breakout rooms, which each consisted of about five other students and one faculty member who served as the discussion’s facilitator.

To start off the conversation, students went around the room and shared their personal experience as well as reasons and individual goals for participating in the community read event.

Many students participated in the community read event to get a different perspective on racial issues and hoped to contribute to the discussions by coming up with plausible ways of putting an end to institutional racism.

Other Webbies saw this as an opportunity to engage with the Webb community as a whole. Chris Arzate (‘21) was excited to show up to the community read to not only discuss the book, but also to reconnect with his fellow Webbies and speak to some freshmen who he has not been able to meet.

“It was really great to see people in such an intimate space,” said Emily Wang (‘22). “Even though it was online, the topic that we were discussing allowed people to be openly vulnerable. The vulnerability made me feel connected to my peers, which I haven’t really felt since the beginning of quarantine.”

Students then exchanged significant moments when reading the book and then moved on to discuss a variety of open-ended prompts ranging from binary definitions of racism to ways of applying the lessons learnt from the book in the larger Webb community.

“I liked the community read, it was fun and felt like everyone got their turn to talk about their own perspective on the matter,” said Katelyn Arzate (‘23).

“It was a good experience and it inspired conversations, which is the purpose of the read,” said Chris. “I stayed for an hour and a half after the community read ended to continue the conversation.”

The event was not perfect, as some Webbies provided insights on potential ways to improve future meetings. People noticed that sometimes, the room was a bit silent, perhaps partly due to people’s hesitation when it comes to talking about sensitive subjects.

Some others pointed out that it would be even better if students with different perspectives joined the community read event, as it is a valuable platform for people to communicate across differences.

“I would want to change it by encouraging more people with different opinions on the matter to join for more of a formal discussion with more open minds,” said Katelyn. “I think they can help the community as long as everyone keeps an open mind, and they allow for more peaceful disagreements.”

The faculty also had a lot to say about the community read. Though a lot said there were some changes that needed to happen to improve the next one, the consensus was that this event was a success. They enjoyed listening to the students’ input on the discussion on hand, as well as how the students plan on using the information to help the Webb community.

“I do think it was a success. We had over 84 people attend on a Tuesday night,” said Dr. Susanna Linsley, Director of Experiential Learning. “One thing that we need to change is to make it longer. 30 minutes isn’t enough time. Another thing we want to change is to double that number (of attendees) next time.”

This is only the beginning — this community read event is only the first of many to come, each better and encouraging more Webbies to engage in difficult but crucial conversations about racial equality. While these events may not put an instant end to institutional racism in our society, they inspire and produce changemakers in our community.