Students Fall into the Toxic Trap of Social Media 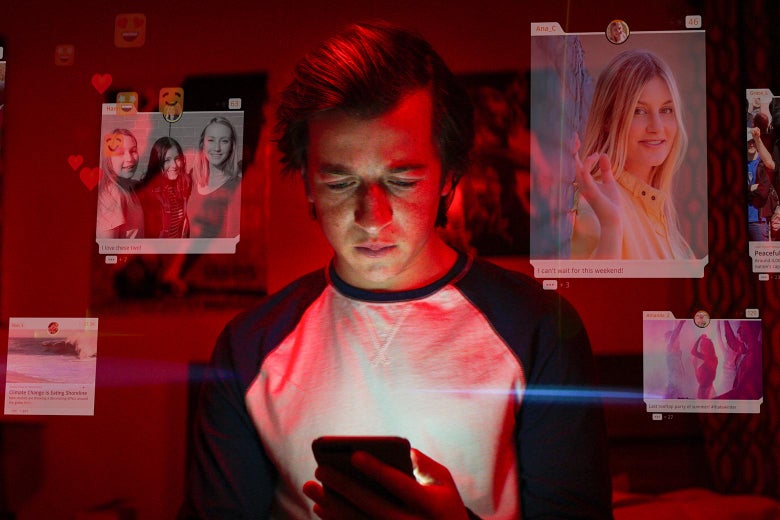 Actor Skylar Gisondo portrays a teen struggling with social media in the film.

Living in the “Age of Technology” means that social media has become a prominent aspect of our lives and a useful form of communication. Although we tend to focus on how it has positively impacted society, it is easy to overlook the many ways it may be controlling us, damaging our mental health, and taking away our privacy. This mindless entertainment and loss of time have caused sleep deprivation due to piled up work at least a few times for any student. All these issues and more are tackled in the Netflix documentary, The Social Dilemma.

The hair-raising documentary was aired in the United States on September 9th of 2020. 2020, which seems to consistently be the year of catastrophe, could not have been a better year for a wake-up call. The film reveals the dark side of social media and how we are being conned every time we look at our social media apps.

Social media is rewiring our minds by implementing algorithms that are specifically designed for each user to draw and keep their attention. We are unknowingly being deceived into distorted ideas about the world, ourselves, and each other. The documentary also goes into depth of different outcomes of manipulation from social media has and will have on the world.

Jeff Orlowski, the film’s director, uses the documentary to argue that social media platforms are created to specifically target and manipulate human behaviors that draw users in and keep them involved. The constant scrolling, double tapping, commenting, liking, and various other features are what keep social media users engaged and, inevitably, addicted.

People naturally want to stay connected with others and build strong human connections; this desire allows social media to become a creative trap that preys on this mindset. Users log on for connection, but easily get lost in the falsities social media is known to portray through ads, editing, and propaganda.

To amplify the effects of his message, Orlowski incorporates fictional scenes of a family dealing with the extreme consequences of social media. Actors Skylar Gisondo and Sophia Hammons play teenagers dealing with mental health problems, a separation from reality, and self-esteem issues all from the apps they believe are bringing them entertainment and relief. The family portrayed in the film can barely even hold a conversation, showing that the bonds we believe we are building through social media are hurting our connections in real life.

Bringing to light the type of mental health issues social media creates is important so that students know they are not alone. Likes and comments create a mindset that the more numbers you see, the more attractive, desirable, and appealing you are, making life feel like a competition. This mindset is detrimental, for it is exhausting and dangerous to let these social media features affect the way we see ourselves.

“It is this state in which our minds are constantly anxious and wondering if anyone around us is noticing the differences in our bodies to those with a higher number of followers,” said Camile Casper (‘24). “Every individual has been uniquely created, but stuck in this mindset, we tend to believe that we are the problem.”

Social media is now a part of everyone’s life; all information stays online and leaves a footprint that remains there forever. Because of that fact, it just takes one search to bring up unfortunate incidents from the past and use that proof to ruin a person’s career. False information and plain lies are told daily in believable ways. Depending on the situation, that can be a wonderful thing, taking away a platform from someone chaotic and a bad influence to younger audience members, but it can also be completely taken out of context, tearing apart what someone worked hard to build. This proves how social media is extremely toxic, and most of the time, people have made and defined their opinions that rarely change.

John Haidt, who was featured in the documentary, holds quite the extensive background in psychology and how social media manipulates our psyche. Some of his resume includes a Ph. D. in Psychology from the University of Pennsylvania, being a Social Psychologist at New York University, and being the author of the book The Righteous Mind: Why Good People are Divided by Politics and Religion.

In the documentary, Haidt elaborates how statistics have shown the negative effects social media has on youth today:

“There has been a gigantic increase in depression and anxiety for American teenagers which began right around between 2011 and 2013. The number of teenage girls out of 100,000 in this country, who were admitted to a hospital every year because they cut themselves or otherwise harmed themselves, that number was pretty stable until around 2010, 2011 and then it begins going way up. It’s up 62 percent for older teen girls. It’s up 189 percent for the preteen girls. That’s nearly triple.”

The consequences and risks of social media should be explored and communicated more to prevent harm to those who partake in the media. Social media nowadays has increasingly detrimental effects on mental health, and the toxicity should be tackled and removed. The Social Dilemma presents all this information eloquently and informatively, striving to impact social media users and creators with their research.