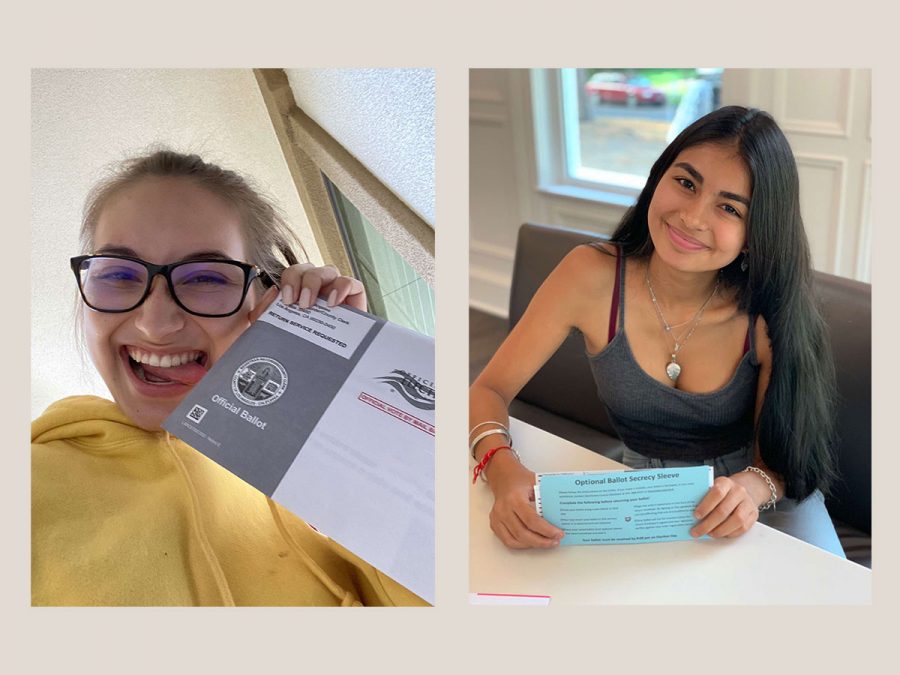 Maya Gutierrez (‘21) and Maya Dholakia (‘21) pose with their mail-in ballots. A record number of Americans have cast their votes by mail this election season due to the Covid-19 pandemic.

With early voting underway in over 40 states, millions of Americans have already cast their ballots for either President Donald Trump or former Vice President Joe Biden in the 2020 Presidential Election. Despite the looming threat of COVID-19, voters are turning out in record numbers to cast their ballots. As of October 30, 2020, 85 million Americans have voted early, already exceeding the entire early-voting period of 2016.

Perhaps the biggest contrast between this election and the previous ones is the turnout of young voters. So far, voters aged 18-29 have cast three times as many ballots than at the previous time in 2016. In some swing states, the number of youth votes has already surpassed the margin of victory for Donald Trump in 2016, meaning that young voters could, in theory, determine the outcome of this election.

This influx of young voters may heavily benefit Democratic candidates across the country. According to Pew Research, more than three quarters of Gen Z voters (18 to 23 years old) disapprove of President Trump, representing a demographic that was not eligible to vote in 2016.

At Webb, some seniors over the age of 18 have already cast their ballots for the Democratic candidate for this election, celebrating their rights as citizens to participate in democracy through voting. Believing in the power of each vote, Webb student voters did not hesitate to engage in politics in hopes of affecting change.

“Voting has always been something that I have looked forward to doing,” Maya Gutierrez (‘21) said. “I think it is vital as a citizen to understand the issues in our country and community and use our right to vote as an amplification of our voices. It was important to me that I vote for what I believe is right.

“I am voting for my rights as a female, and I am voting as an ally to the LGBTQ+ community, and in support of the BLM movement,” Maya said. “Elections cause change, they have consequences, it is your community that will be affected and if you give up your vote, you are giving up your voice.”

Many young Webb Democrats view the 2020 election as an opportunity to support the political leaders who could best safeguard the basic rights of citizens, including minority rights. Democratic voters see this election with the potential of leading the nation towards a more hopeful direction and various other problems that are left unsolved under the current administration.

“The majority of our government right now is silencing minority voices and telling us we don’t deserve basic human rights,” Maya Dholakia (‘21) said. “Equality is still up for debate, human rights are treated like opinions, and the country is becoming more and more divided. These things are not a ‘difference of opinion.’

“Almost every community I have identified with growing up has been a minority group, and I refuse to let our validity as humans be brought into question by people who have never had to fight for their voice,” Maya said. “Our struggles make our voices even more powerful, and it would be a shame if we didn’t use them. I voted because. I had to fight 18 years for my voice, and I refuse to have it silenced again for the next four.”

“I chose to vote because I’ve been disappointed these past four years in the fact that we can have a President like the one we elected,” Santiago Noblin (‘21) said. “I know I have to do my part to make sure we elect someone who is qualified and is going to do what is right and act accordingly, and I feel like these are really simple things to ask for. I did vote for Biden but it is not like I think he is the perfect candidate, or that he has the progressive stance on some issues that I wish he did, but really it is him or the other situation, and if we want to move forward in a positive direction then he is going to have to be the guy.”

The seniors are not the only ones who are actively engaged with the 2020 election. Although under the voting age, many Democratic students at Webb actively participate in politics and contribute their fresh voices to the larger world, using social media and other platforms to inform themselves and impact others. Understanding that the world around them is not perfect, the Gen Z to-be voters at Webb are proactively learning about political issues and getting ready to cast their votes in the next election.

“Even though I am not yet old enough to vote, I think it is important to engage in learning about politics and to start forming my own opinions based on the issues I am most concerned about,” Emily Berg (‘24) said. “How the presidential candidates claim they will handle [the environmental issues], as well as the pandemic, social justice demands, foreign policies, along with their reputations of upholding honesty and responsibility is what determines whose ideas I support. To encourage others who can vote to consider these issues, I will often share and repost accurate information through my Instagram platform to share my voice and participate in these discussions.”

Approaching the voting age, some students have started exploring the political compasses and finding the positions that they support, developing their political consciousness even before the 2020 election.

“I am preregistered to be a Democrat, and I choose my political affiliation based on how similar my morals are to theirs,” Celine Lau (‘22) said. “As such, I’m willing to accept that the faction may not represent everything I believe in, though I will admit that one of the biggest driving forces that keeps me a Democrat is the immense amount of religious rhetoric that ‘justifies’ restricting a certain groups’ human rights in the Republican party.”

In the wake of a global pandemic, an economic recession, and an international movement towards racial justice, young people are acutely aware that changes must be made at state and federal level. Many are doing their part to educate their peers, express their opinions, and put pressure on their leadership to act.

“The issues that are most concerning to me now are climate change, Covid-19, and social justice. I am heavily invested in voicing my opinion on these issues because millions of people are feeling the effects and suffering from them,” Hunter Lange (‘22) said. “I am driven by empathy to speak up about these issues on platforms such as Instagram and Snapchat. I share a lot of resources for people to educate themselves on different issues going on in the world right now, along with my personal opinions on these issues. I hope that by speaking up, others will speak up as well.”

Although individual actions might seem small under the larger electoral system, students who already voted strongly believe in the power of democracy and the rights to exercise their power as citizens in order to make a difference.

“The Presidential election is so dependent on the electoral college and it frustrates me that there is not a popular vote,” Abbie Oh Arroyo (‘21) said. “I know some people don’t vote because of this sentiment, but we need to remember that there are other things to vote for like the propositions that affect our state. This is so cliché, but your voice does matter, and you can still make a difference. Choosing not to vote is still a choice you’re making, so one should use their power and put their vote towards building a better future.”

The 2020 election could be the year for young voters. With active participation and rigor, the younger generations will play huge roles in deciding the results of the 2020 election. As Webb student voters and to-be-voters participate in politics and contribute their voices to the world, it will not be surprising to see Gen Z soon dominate the political arena.