Dodgers triumph in the 2020 world series 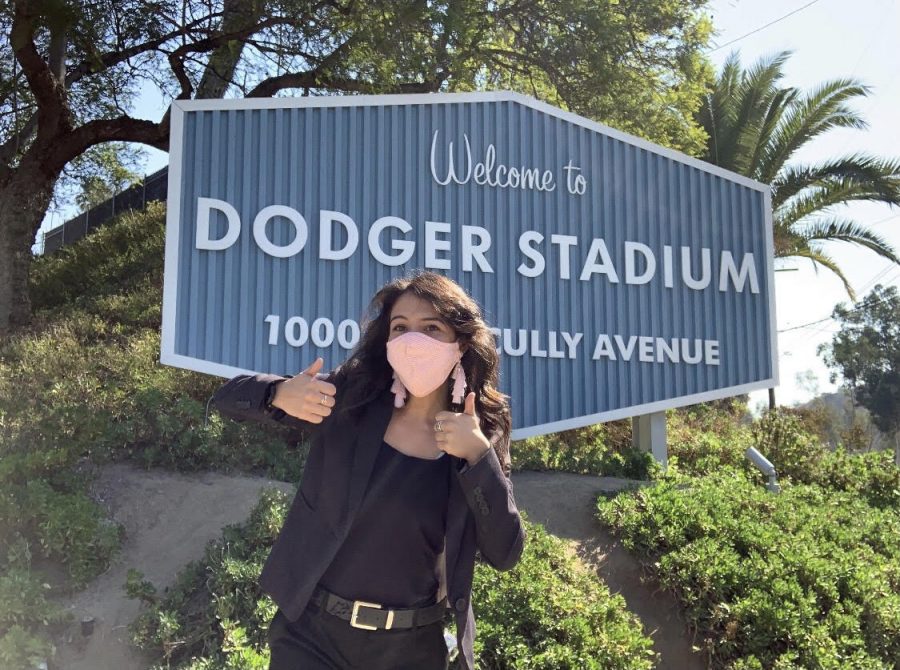 Skyler Rivera (‘18) stands in front of Dodger Stadium because she cannot be there to watch games. “The Dodger fan base is legendary, they ride or die and so for this team to win, especially in a time like this where the mood of the country is down and out, it’s a real mood booster,” Skyler said.

For the first time since 1988, Dodgers fans celebrate a championship. However, this road to success was not an easy one, as the Dodgers encountered many obstacles. The Dodgers have lost the world series twice since 1988 and in the other years, they could not make it to the playoffs and struggled in league championships. Nonetheless, the Dodgers’ determination and perseverance through an uncertain time allowed them to clench a well-deserved title amidst a season filled with unexpected events.

After becoming the National League champions by defeating the Atlanta Braves in seven games, Dodger fans burst with excitement while also feeling nervous. In 2017, the Houston Astros beat Los Angeles in a seven-game series and were subsequently exposed for MLB rules violations. In 2018, the Dodgers lost the Series to the Boston Red Sox. With the hope that “the third time’s the charm”, Dodgers fans anxiously followed each game, waiting for players to step up and score more runs or make an incredible play.

“In the second game, they kept switching out the pitchers every few innings which kind of made my friends and I mad,” Julia Fenner (‘23) said. “There was not a real groove for anyone to get into because of the changes, but when I watched the last game by myself, I quietly celebrated when the Dodgers won.”

A win for the Dodgers means so much to fans as many of them are extremely dedicated. Although the fans are not the ones playing, they still share a special love for the sport and the team. After years of hardships and misfortunes, it puts many fans at ease and makes it easier for them to accept that they will not be in the Dodger Stadium atmosphere for quite some time.

“I thought the world series was fun to watch,” Gabe Bustamante (‘21) said. “I think that in game six, the Rays pulled [starting pitcher Blake] Snell too early. He was only at 74-75 pitches and gave up two hits and got pulled against Mookie Betts who had two strikeouts against him and struggled to hit left-handed pitching all year. That was a big momentum changing moment.”

The thrilling series was full of soon-to-be iconic moments as players like Justin Turner and Clayton Kershaw set postseason franchise and MLB records. Turner, the 35-year-old third baseman who has played for Los Angeles since 2014, set a Dodgers franchise record for postseason home runs when he hit his 12th in Game 4. Kershaw, LA’s longtime ace and future Hall-of-Famer who has been criticized for his postseason performances in the past, set the all-time postseason strikeout record at 207 after recording six in Game 5.

While most of the glory goes to the Dodgers, the Rays also featured standout performances, including an all-time great playoff run by outfielder Randy Arozarena. Arozarena set a single-postseason home run record, hitting ten over the course of Tampa Bay’s postseason.

“Arozarena was the best thing to watch the entire post season as he set all kinds of records,” Gabe said.

Since the Superbowl in February, there has been no professional championship games to watch until recently. For most sports lovers, this was a brutal change not being able to watch their favorite sport or hometown team. However, this long wait is part of what made this year’s championship games even more enthralling.

Los Angeles is a city of champions in 2020, now that the Dodgers have joined the NBA champion Lakers in celebrating their ascent to the top of their league.

“I’ve been a Dodger fan my whole life and I really got into the team when I was 12. My family has been season ticket holders since before I was born so I grew up going to games. I’ve cried over this team, loved this team with my heart, been trash talked countless times about this team, and they’ve finally won. It means the world to me,” Skyler Rivera (‘18), former Webb Canyon Chronicle Editor of Sports.

LA sports fans are experiencing levels of pride and elation not achieved in decades. This type of victory hasn’t been felt by those of LA in over 30 years, so expect to see fans finding new ways to share in the glory despite the pandemic.