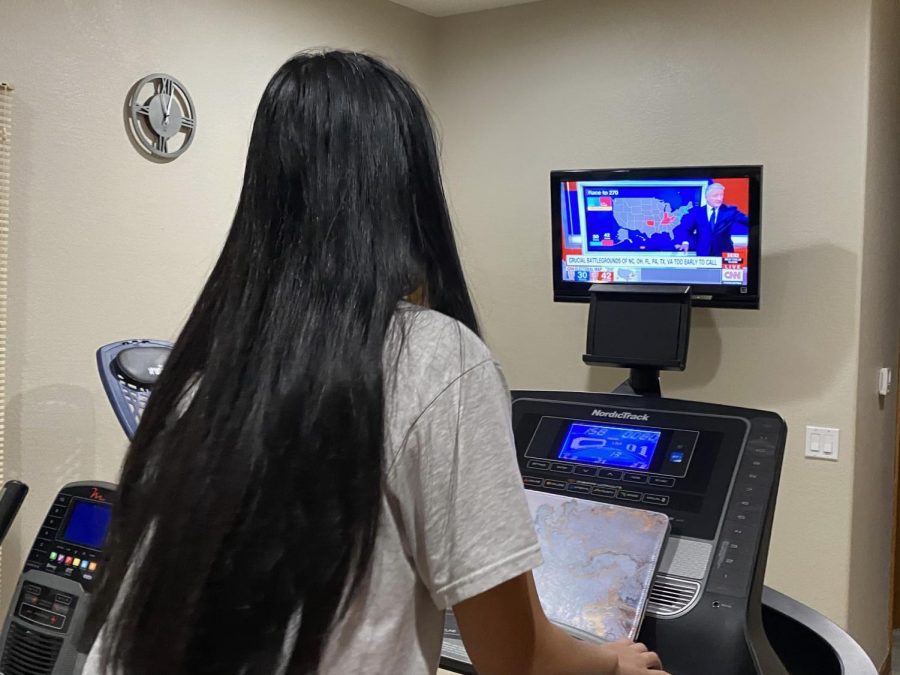 Alice Phung (‘21) follows the news to receive updates on the election.

Millions of Americans went to the polls on Tuesday, November 3rd, to cast their votes for a Presidential candidate. With a massive increase in voter turnout compared to 2016, especially in early voting, the 2020 Presidential Election will be one for the history books.

Nearly 100 million voters, two–thirds of the total number of votes cast in 2016, cast their ballots before Election Day. Much of this increase was fueled by mail-in voting efforts that several states adopted due to the COVID-19 pandemic, though President Donald Trump has repeatedly attacked the vote-by-mail process with baseless claims of rampant voter fraud.

“I think the winner should be declared when all mail-in ballots are counted,” said Wendy Maxon, humanities department faculty. “I think that mailing a ballot is a way to democratize the voting process and get more people able to vote. And if the established policy is that you have until x time on x day to vote, then that policy needs to be abided by. Declaring that the winner must be known by election night sets up a scenario that too easily lends itself to sabotage.”

These mail-in ballot protocols complicate the traditional picture of “election night”, wherein a winner is projected after counting enough votes in each state for one candidate to gain 270 electoral votes. Due to the different procedures of each state and the influx of mail-in ballots, it is uncertain when enough votes from each state will be counted to determine a winner.

Going into November 3rd, Democrats were projected to have a good day. A consensus of polls had Joe Biden sweeping at least 290 electoral votes to President Trumps 163, without considering tossup states. Additionally, Democrats were expected to maintain a majority in the House of Representatives, and some polls had projected a Democratic majority in the Senate as well. Despite polls showing Joe Biden with a substantial lead over the President, and remembering the 2016 polls which projected a win for Hillary Clinton, Democrats were determined to get out as many votes as possible, especially in swing states.

Throughout the night, as polls closed across the country, President Trump and Joe Biden began to accumulate electoral votes. The first swing states to be called were Florida and Texas, both of which went to President Trump, though the remainder of tossup races were being counted well into the next day. Vote counting in Fulton County, Georgia (containing Atlanta) was halted, to be resumed at 8 a.m. EST on Wednesday, November 4th. President Trump showed a strong lead in Georgia early in the evening, but that lead slowly shrank as urban area and early votes were counted.

Georgia was not the only state where this was true. In Pennsylvania, Michigan, Wisconsin, and North Carolina, election day votes favored President Trump. However, this tally did not represent millions of mail-in and early ballots that had not been counted, and those votes were more likely to favor Joe Biden.

At 12:30 a.m. EST, 9:30 p.m. PST, Joe Biden addressed a drive-in crowd of supporters, expressing optimism in the results and expressing the necessity that every vote is counted. Two hours later, President Trump addressed supporters in the East Room of the White House. In his speech, President Trump declared that he had won Georgia and North Carolina, two states that had not yet been called, and called to stop the counting of ballots in the remaining states.

“If I learned anything from 2016, it is to not get my hopes up too early,” said Lauren Hartle, humanities department faculty. “As of right now, the race is much closer than I hoped it would be. Regardless of who wins this election, we have a lot of work to do to bring about real change. This includes, but is not limited to, healing and racial justice; reform of our institutions—the police, corporations, the judicial system; thriving wages instead of living wages.”

Americans woke up on November 4th with no victor declared, ballots, mostly absentee, still being counted in several key states. Throughout the day, President Trump’s margin shrank consistently as these votes were reported. Joe Biden pulled ahead in Michigan and Wisconsin, which were eventually called for Biden along with Arizona. These states represent races that Donald Trump won in 2016 and have flipped Democratic in 2020, though the Trump campaign is expected to request a recount in Wisconsin.

Additionally, the Trump campaign announced that legal action would be taken in Michigan and Pennsylvania, key states with millions of mail-in ballots. In Michigan, whose electoral votes are projected to go to Joe Biden, the campaign demanded permission to review ballots that had been counted, and in Pennsylvania, the campaign says it is suing to stop the vote count, intervening in a Supreme Court case.

“So far in this election, I’ve been feeling a little stressed because the stakes are so high,” Hunter Lange (‘22) said. “The Trump campaign taking legal action against Michigan and Pennsylvania is not surprising because they know that the mail-in ballots have a chance to overturn those states. I just hope that we can get all the mail-in ballots counted soon and accurately because Trump is trying to discard over a million votes right now. This isn’t what democracy looks like.”

With Wisconsin, Arizona, and Michigan called throughout Wednesday by the Associated Press, Joe Biden only needs the six electoral votes from Nevada to put him over the 270 vote threshold, whereas President Trump must win all of the remaining states, Nevada, Pennsylvania, North Carolina, Georgia, and Alaska, in order to be reelected. New votes from Nevada are expected to be reported Thursday morning, and will likely determine the recipient of the state’s electoral votes.