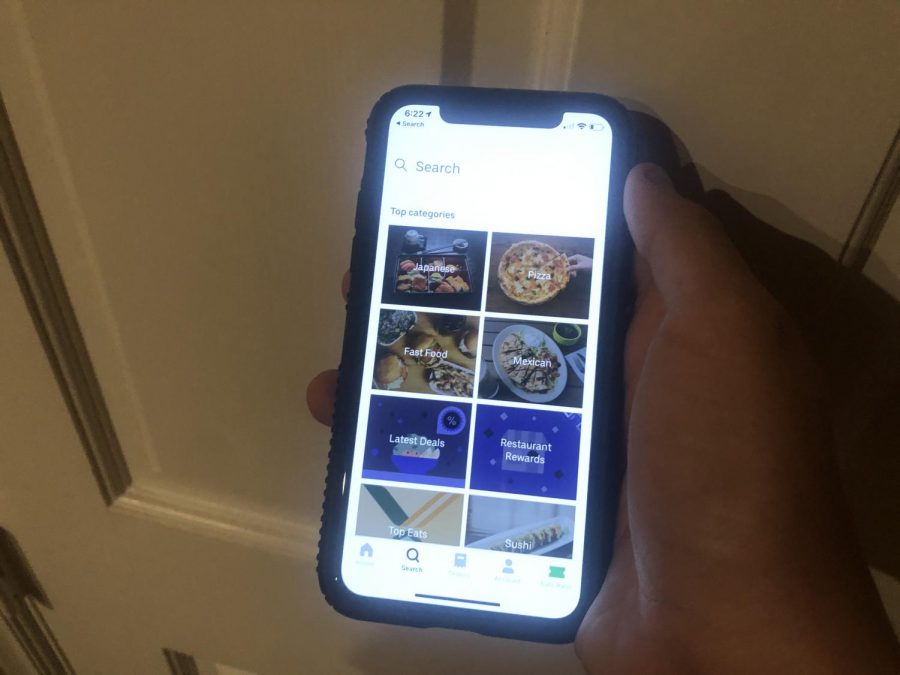 Food delivery apps have become more popular during the pandemic.

As Webb approaches its eighth month of online learning, many students find themselves reminiscing about things as simple as ordering boba on a Friday with friends.

“I enjoy ordering food and eating it in my home,” Joey Silva (‘21) said. “But I really miss eating in person the experience at home really just isn’t the same.”

However, as we reminisce, these gig-workers, people who are employed through online applications like Uber, are struggling to stay afloat. During the past 10 months of quarantine, these gig-worker have been suffering financially, for the companies they work for do not guarantee them any rights that would normally be mandatory paid sick days have never been guarantee for gig-workers.

Why have these crucial and fundamental right not been guaranteed? Well, this is all due to their employment status because, legally, they are not employed by major companies like Uber Eats or Grub Hub; instead, they are classified as independent workers. Even worse, this already low paying and competitive field has become more difficult to make living wage because more people have begun working for these companies due to job loss in other fields throughout the pandemic.

For example, Uber has added 36,000 employees since March in New York alone. To add to the worsening condition, Prop-22, which was recently passed in California, essentially denies gig-workers their basic rights entirely that most people are entitled to, such as paid sick leave and eliminating safety measures put in place to protect Uber drivers.

Some of these companies like Grub Hub are more responsible and supply their employees with better pay; however, this is only the result of significant lawsuits against the company for using tips to subsidize employees’ pay.

Looking at propositions that were passed in California, these conditions that gig workers had been working in for years is now getting even worse. Prop-22, a controversial proposition, was passed during the 2020 election after companies like Uber spent two hundred million dollars lobbying and creating misleading ads that resulted in a large portion of California voting “Yes.”

Voting “Yes” for Prop-22 means a vote against gig-workers in general and their safe employment. Gig-workers, who depend on these jobs as their source of income during a pandemic and recession, now fall to the biding of these companies.

“The most damaging aspect of Prop 22 is how it was passed. Gig companies such as Uber, Lyft, and Door dash spent well over 200 million dollars on just this one ballot campaign and managed to get 58% of the vote in CA, a state perceived to have one at least somewhat progressive value,” Marshall Olmos (‘21) said. “We must consider the question of what percentage of the 58% actually knew the effects of what they were voting for, or if they shaped their opinion off of the ‘Mothers Against Drunk Driving for Prop 22’ commercial that was widespread on TV stations across the state leading up to November 3. It sets a future precedent for corporations to, in effect, buy propositions in the manner that these gig companies were able to do in order to further erode upon workers’ rights.”

“I am disappointed with Prop 22 passing, I believe at that level, referring to multibillion dollar companies,” said Gregory Tolmochow (‘21). “Workers’ rights are the most important so they regulation is needed to make sure they can live their lives.”

What is most concerning, however, is how gig-workers are soon to become one of the most volatile forms of employment in the US. Scott Galloway, professor at NYU stern, in an interview with CNN regarding these gig-apps said, “A menace to society. Has created a permanent underclass. Use software to circumvent minimum wage laws.”

In the meantime, these app-based companies will continue to purchase propositions to further labor exploitation, and these gig-workers cannot do anything to oppose them right now due to the pandemic and the fact that this is the only job employment many can find now.