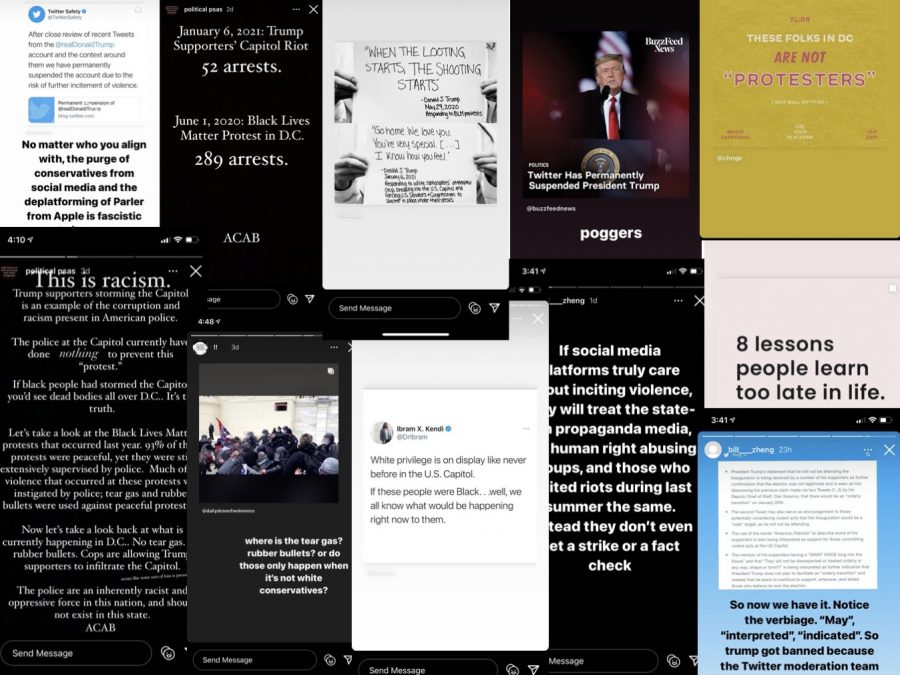 Social media is a marvelous way for people to communicate, bond, and share content. Recently, it has become an outlet for people to share their beliefs and opinions, specifically on the current political climate. Platforms such as Instagram and Snapchat have boomed, as Webbies shared informational posts and their opinions on how the Capitol raid led by Trump supporters made them feel.

“Social media was made for interaction and I feel it has created a gateway for people to speak out about the riots,” Gabby Diaz (‘23) said.

On January 6th, 2021, many Webbies opened their phones and were met with floods of posts about the riots at the Capitol. Instagram, Twitter, Tiktok, Snapchat, and almost every social outlet were filled with opinions and information on the events. Yet social media users are biased and can provide people with misleading information. People tend to use social media as their sole news outlet, which can lead to false truths being spread widely across communities.

“I think there is definitely way more harm than good done posting on social media,” Bill Zheng (‘21) said. “Social media algorithms forced us to fall into an echo chamber that shields us from all dissenting opinions, and as we increase our usage of social media, our attention span decreases, which is proven by multiple studies. I believe people should do their own research before sharing anything on social media platforms, and we should not take everything on social media for granted.”

Because of these discrepancies, it is important to check multiple reliable news outlets that can give the perspective of both sides of a conversation.

“Social media is a part of how I gather news, but I also use other news sources,” Stratton Rebish (‘24) said. “A perk of social media as a news source is the speed at which you can consume the news, but a disadvantage is that information is sometimes exaggerated or straight up false. To combat this, I watch the news or confirm the news with trustworthy social media accounts.”

On the other hand, social media users believe that the platform strengthens their voice, but, unfortunately, as people repost, retweet, and share, many of these posts can contain information that incites hate and violence.

“When people are given a platform such as Twitter to state their opinion, it can often times be met by like–minded individuals who further retweet and spread that person‘s idea,” Makysm Graham (‘23) said. “As a result, this can lead to more exposure and a more powerful voice. The problem with this is that it also means people’s divisive ideas filled with hate are also amplified.”

Sometimes, engaging in difficult conversations over a comment section or a social media post is not the best idea. There are many thoughts people feel confident saying behind the screen that they would not say in-person. Instead of commenting hateful words, you should promote having real–life, productive conversations, which, in this time means Facetime or Zoom calls.

“My mom and dad and many other parents said the same thing—if you can’t say it in front of the person or other people, then you need to zip it,” said Rick Duque, WSC Dean of Students. “I was always encouraged to have a face-to-face conversation and I still believe that it has always been the best way to go when it comes to cultivating relationships with a solid foundation. Nothing can ever replace face to face interactions.

Censorship in the media has been a heated topic for discussion, especially with Donald Trump’s Twitter account being suspended. Many students discussed whether they believe this censorship was for the better or for the worse.

“I believe people are under the misconception that the first amendment allows for any and all speech,” Maksym said. “It does not. You are not allowed to incite violence with your speech. Donald Trump has done this over and over again. Furthermore, social media sites are allowed to establish their own set of rules.”

However, other Webb students disagreed with Twitter’s decision and advocated their voices through social media.

“I believe Twitter is on the wrong side of this matter,” Bill said. “Twitter, as a place that holds public discussions, should only either moderate all content the same way or not moderate content posted at all.”

Social media can help grow communities and spread positivity; however, it can also be a network for hate and negativity. When using social media, people should consider how their post could be beneficial and useful to others; this includes educating others, promoting unity, and being open for discussions. Before reposting or sharing information, students should use all resources available to assess whether the information is true and make sure that they contribute to their communities in positive ways.

“I can use it [social media] as a platform for my voice and express my opinions freely, regardless of any judgment,” Izzy Kim (‘24) said. “It is also nice to see others advocate for the same things that I agree with because it helps me feel more confident about my values and beliefs when it comes to politics. I understand, however, that social media is also an area for people who encourage riots like this, which is not something that I will stand for.”

In the time of COVID-19, it is more difficult for Webb to hold meaningful discussions on prevalent topics. Now, students are more reliant on social media to share their opinions and connect with others. These social platforms are available to them all day and night whereas a Zoom call with faculty and other students is limited. Social media can bring a myriad of communities together and create a strong, positive voice; however, this can only be done when people are not so reliant on them. The riots at the Capitol emphasized that when behind a screen, people are prone to believe whatever their feed says to believe, which can in turn cause division and even violence.