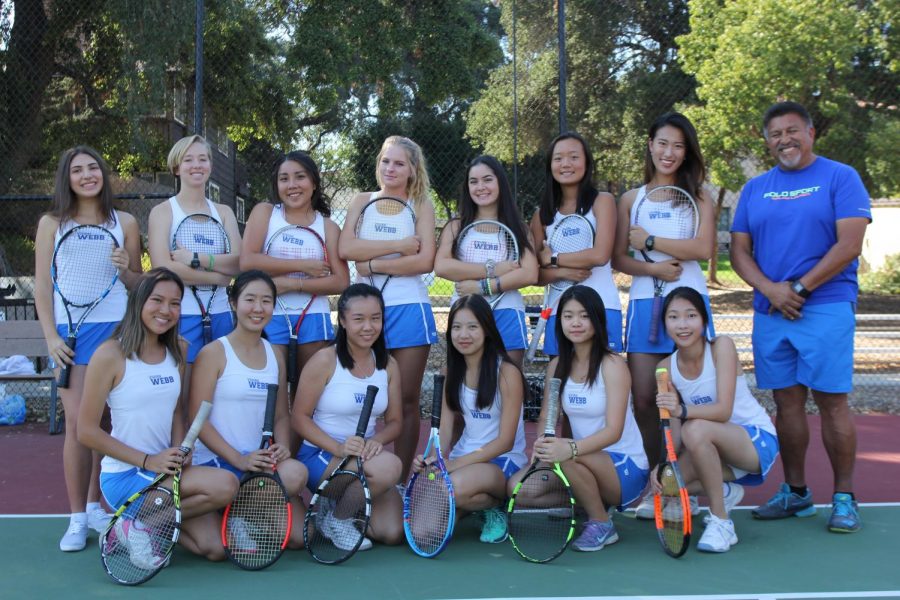 There is much more to tennis than whacking a green ball back and forth. Vivian Webb School’s tennis players have trained countless hours in the Southern Californian heat to master both the mental strategy and athletic form essential to enhance their game.

On October 19, VWS played against Fairmont Preparatory School of Anaheim, their most competitive rival within the San Joaquin League. After tying for the title of Co-League Champions last season, VWS managed to pull off an impressive 13-5 win against Fairmont during the Gauls’ Senior Game.

After winning League for the fourth consecutive time, some of Vivian Webb School’s top tennis players continued onward to compete in League Individuals for a chance to represent the school in CIF.

Captain Thea Kirkpatrick (‘18) was crowned League MVP and Singles Champion for the second year in a row, while Captain Macy Huang (‘18) and Emily Schoffman (‘19) were named League Doubles Champions.

Coach Ron Martinez, who has been involved with both WSC and VWS tennis for five years, shared optimistic views of the future of VWS tennis. “To be honest, I did not anticipate us being this good, but we are going to CIF, we won league, we are number one in both singles and doubles… we are cruising. Next year’s team should be very competitive.”

When asked about her thoughts playing tennis for Webb as a new sophomore, Jenna Zhao (‘20), who placed third in the League Singles Tournament, said, “Being a boarder, I know that there are so many people I can call to hit with me on the weekends or after school when I don’t have anything to do. If no one picks up, I can still practice hitting against a backboard. There is always room for improvement in tennis, no matter how good you think you are.”

The first round of CIF Team Tournament will commence on Wednesday, November 1st at 2:00pm. Since it is a home game, we hope to see many of you there. Go Webb, go Gauls!