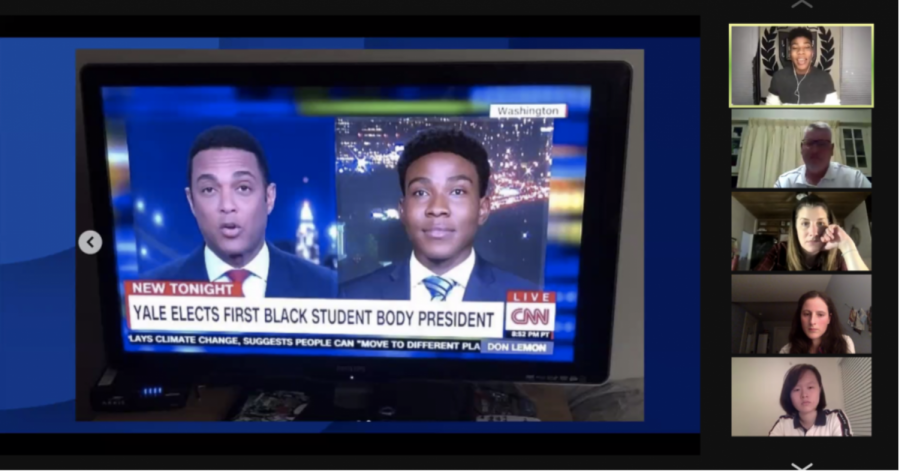 Members of the Webb community gather at Sunday chapel for Mr. Kahil Greene’s talk about honor.

Last year, many universities switched to a pass/fail grading system after the outbreak of the pandemic because of the many challenges that online learning presented, especially for students from low-income families. Yale University was among the schools that made the change. The policy did not just come out of nowhere; instead, it was the result of student advocates who spoke to college professors and school administrators to present the voices of the students who struggled during the pandemic.

One of the student leaders behind the change that aimed to alleviate the academic burden was Kahil Greene, a senior at Yale College and its first Black student–body president. Arguing against Yale’s philosophy professors’ point that even students with the coronavirus studied for exams and should be rewarded with letter grades, Kahil Green pointed out these institutional problems, where students prioritized their grades over their health.

On Zoom, Webb students and faculty members located at different corners of world gathered together, as Kahil Greene told the stories of fighting for equality, justice, and honor in his community and beyond. On Sunday, January 17th, 2021 at 6pm PST, Kahil Greene spoke to more than 400 members of the Webb community about his stories as an advocate of equal rights and shared his insights on the private and public aspects of honor at the opening of Webb’s Honor Symposium.

“One of the members suggested Khalil, and then we emailed him and soon set up a meeting to discuss,” said Elena Tiedens (‘21), co-chair of the Honor Cabinet. “Though originally, I was skeptical we would connect with Khalil Greene because he is such an amazing person, I’m glad we were able to arrange for him to speak because I think he’s the speaker our community needed.”

As a long-term advocate for minority groups, Kahil Greene has organized a fundraiser for racial justice organizations through the “Yale Together” movement and has used his voice to make his community a more welcoming and inclusive place. In the “Yale, Together” piece from Yale Daily News, for example, he writes that “Black is still black, even in Yale blue” and indicated that despite Yale’s progressive achievements, its racist history and signs of racial profiling in the local community serve as reminders of the long way to move forward.

Greene’s chapel talk aligned with Webb’s dedication to antiracism as well as the HCs’ focus on racial justice and advocacy. Inviting Kahlil Greene to the Webb community to give a speech about his experiences in youth politics, the HCs hoped to further inspire the Webb community to foster open conversations and discussions.

“We’re so glad that Kahlil Greene could speak to us because his views and values connect with our hopes for the future of the HC and our core values,” Elena said. “The HC is a group that connects with the community through honor in areas of Webb life beyond the disciplinary process. We think honor and DEI have a clear intersection because they both speak to what it means to engage with and empower others. I also found it really poignant how Khalil talked about the difference between public and private honor and what it means to live authentically, and I found myself wondering how we can apply our private honor to the public context here at Webb.”

The themes of the chapel talk resonated with many of Webb’s goals this year. The biennial Honor Symposium invited all Webb community members to engage in a discussion on the intersection of anti-racism and honor, encouraging community members to rethink and redefine honor in the age of the pandemic and under a time of continued racial tension and violence. With SDLC, the community read, and the Student Stay Woke conference, Webb has been — and will continue to be — engaged in local and global initiatives that aspire to achieve our core values of trust, honor, equity, and diversity.