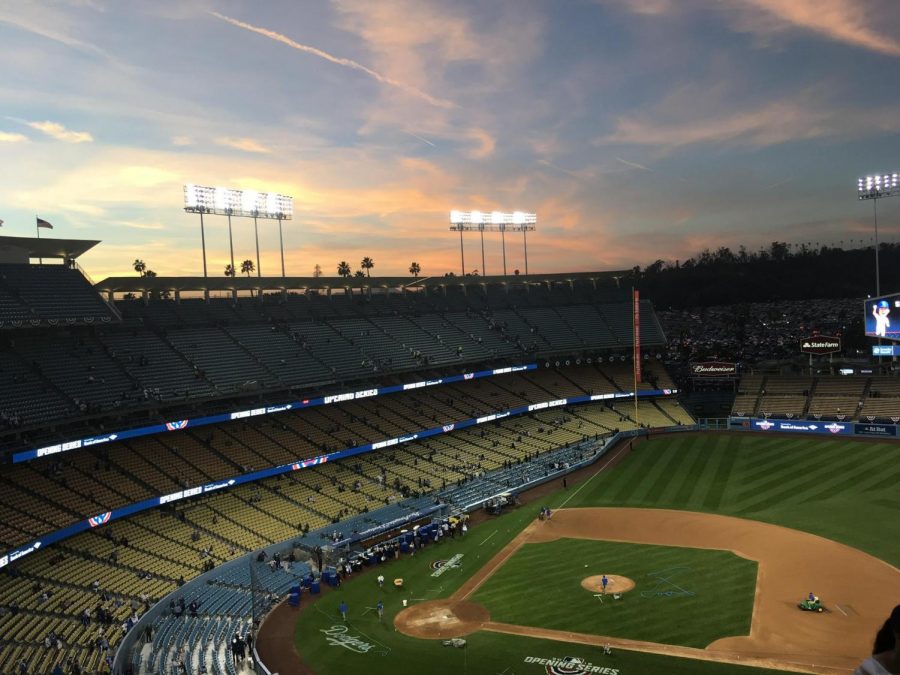 The sun sets over Dodger Stadium.

After coming back from a well-deserved World Series win in 2020 and ending the season on a high note, the Dodgers sparked shock and sadness among fans as they recently announced they will be trading Kiké Hernández and Joc Pederson for this upcoming season.

As fans say goodbye to these star players, many are overwhelmed with sadness and sorrow.

“I think it’s very sad to see them go since they brought so much to the team,” Jacob Arias (‘23) said. “They were lethal not only on offense but on defense as well; both are very talented ball players, and I wish Joc and Kiké all the best with their new teams.”

Pederson’s 110% effort made him an amazing outfielder who made game-changing plays. Pederson’s career as a Dodgers player lasted from 2014 to 2020 while Hernández’s lasted from 2015 to 2020. Although both players had good and bad games and were not always reliable, they will still be missed by fans.

“Joc Pederson was a nice bat to have against right-handed pitching,” Isaac Naren (‘23) said. “He also had decent defense in the outfield.”

Besides being a great power hitter, Hernández is most famously known for playing every position except catcher. Fans have seen him play the outfield, maneuver his way throughout the infield, and even pitch in the 16th inning against the Philadelphia Phillies.

“I am going to miss Hernández more because he was clutch, and he played many positions,” Isaac said. “He was also a righty, so he brought balance to all the lefties the team has.”

On January 28th, Hernández announced his departure through an Instagram post, thanking all his fans, his training staff, and ultimately his experience playing for the Dodgers these past six years. Many fans were left sad and upset, stating how the Dodgers would not be the same without him.

“Calling Dodger Stadium home and playing in front of you will forever have a special meaning to me,” Hernández wrote. “I will always be able to close my eyes and think about the times you all screamed out my name after a good defensive play or a bit hit. It’s impossible for me to think about that and not get chills!!”

Not long after, Pederson also posted his goodbyes, again describing how grateful he was for the time he spent in L.A. and excited for what is to come in the next chapter of his career playing for the Cubs.

“Despite the loss of Joc and Kiké, I still think that the Dodgers will remain one of the best teams in all of the MLB,” Jacob said. “With raw and young talent from players such as Corey Seager, Cody Bellinger, Walker Buhler, and Will Smith, I would not be surprised if they went on to win World Series for a second time. These young men produce outstanding results at the plate and create a solid defense all together and their careers are just getting started.”

However, there still is a silver lining amidst the bitterness as Trevor Bauer, former pitcher for the Reds, will be added to the Dodgers roster. Bauer has many years of pitching under his belt and will hopefully assist the Dodgers in the bullpen, which is an aspect of the game the team struggles with. The Dodgers are faced with many unknowns for the upcoming season and fans are conflicted on how the team will perform.

“My prediction for this upcoming season is that the Dodgers will have a tougher time in their division but will still come out on top despite losing key players,” Aidan Helgeson (‘23) said.

The Dodgers are losing crucial members and there will forever be a large gap in the team that cannot be replaced. While we will still see these players again, they will not be wearing Dodger blue, but rather, enemy colors. Joc and Kiké, we will miss you and L.A. will forever be home to these incredible athletes.