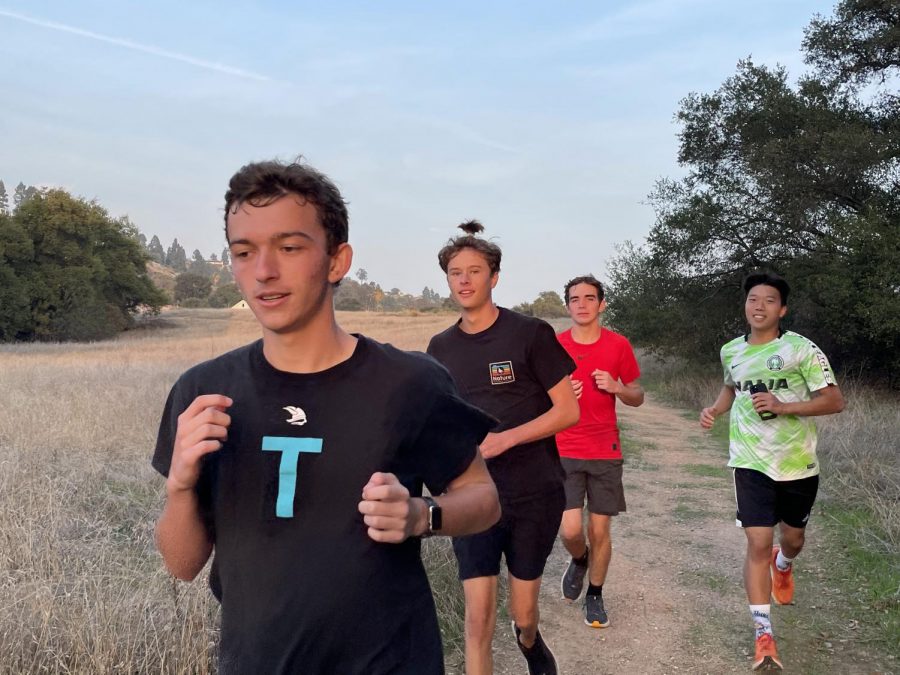 Garrett Cordova-Caddes (‘23), Matt Maschler (‘24), Aiden Helgeson (‘23), and Daniel Hu (‘23) run during practice in preparation for CIF prelims in hopes of qualifying for CIF.

Challenges: “Our biggest challenge this season in cross country was that we had less-experienced runners than in previous years. Usually, we have lots of returning students who know the running routes and can guide new students as they learn. This year, due to the pandemic, we just had a lot less running experience in the team overall.”

Successes: “I think that the fact that our sport was held virtually last year made students even more excited to be running together this year. This was a season that nobody took for granted, so students all utilized every practice to the fullest and worked hard to improve. Since we missed out on a season, we realized how special it is to be able to run as a team rather than just logging our own miles on an app.”

Highlight athlete: “This year, we gave out two awards to varsity and two to our JV team. It was difficult to choose four because we had so many really dedicated runners this season who ran as hard as they could and really pushed themselves. Etienne Griffon (‘23) and Garrett Cordova-Caddes (‘23) won our varsity award. Etienne improved his time immensely from freshman year and came in first place on the team for several races. Garrett also often led the pack in terms of running time and was such a strong and motivating team captain. Falcon Fu (‘23) and Zachary Wang (‘23) received our JV awards for their positive attitudes, commitment to the team, and support of their teammates. Also, shoutout to the freshmen runners this year, several of whom ended up running on varsity. They also had great attitudes and are super talented and hardworking athletes. We had a great team this year.”

Challenges: “Recovering from COVID and getting back into shape especially with [cross country] being one of the first sports of the year. Also, connecting with one another as a team”

Thoughts on the season: “I think this season went as well as it could’ve given our current team, and I think that a lot of players put their heart and soul into this season.”

Favorite memory: “It would be the first practice back. The glee in everybody’s eyes as we came together and started the first run of the season.”