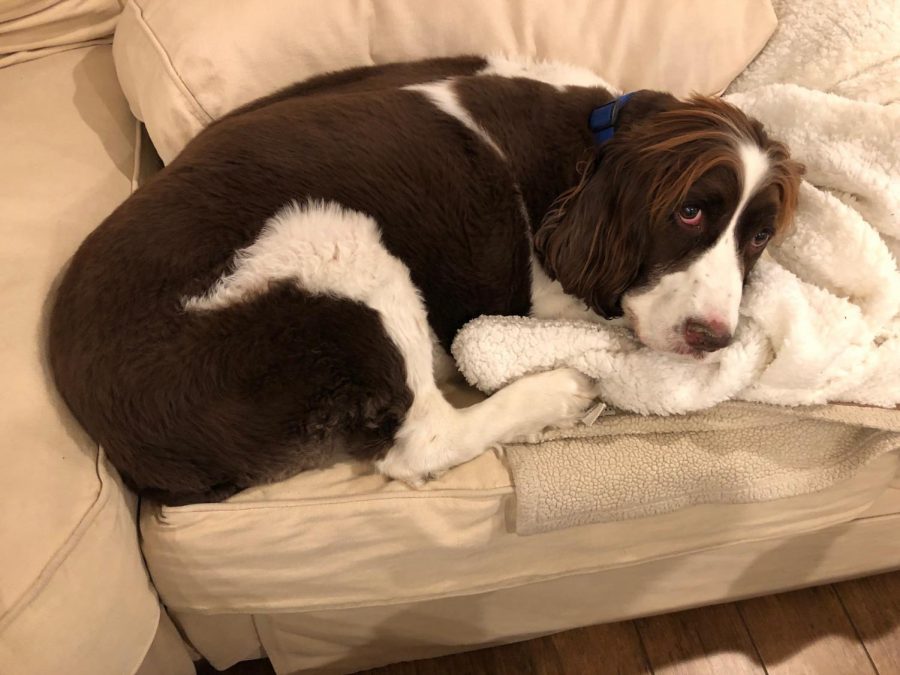 Riley cuddles with his furry blanket.

Riley, a pure-bred springer spaniel, and Emmitt, a long-haired Chihuahua, are dogs from two very different worlds. Miraculously, they make things work together. Both of them belong to Brian Rogers, humanities department faculty. Riley is 75 pounds, while Emmitt weighs only 15 pounds, which explains why they do not play together much.

Riley is super affectionate and incredibly intelligent, while Emmitt is not so intelligent and only knows approximately three words in the English language: treat, walk, and out. Emmitt likes everyone except for Jun Kim (‘19), while Rylie appears to favor adult males.

Although they did not get along with each other at first, because Riley originally saw Emmitt as an intruder of his private space, they have gotten closer since then.

Mr. Rogers said, “Now, they are pals. They are comrades in arms, that they bark at every UPS truck and every human being that walks in a mile of the house. And they frequently sit together butt-to-butt on a chair.”

The two dogs even share some hobbies such as going for walks, chewing bones, and of course, meal-time. However, they each have their odd little habits. For example, Rylie is a clothing enthusiast, who loves to collect shoes and clothes in the household.

Mr. Rogers said, “When he goes upstairs, he will help himself to the laundry basket and select a piece of clothing and lay on that.”

On the other hand, Emmitt is a quiet boy who loves to be pet. He sits on Mr. Roger’s wife’s lap for hours, patiently waiting for her pettings. Emmitt also has his childish side, as he has the habit of marking his territory everywhere.