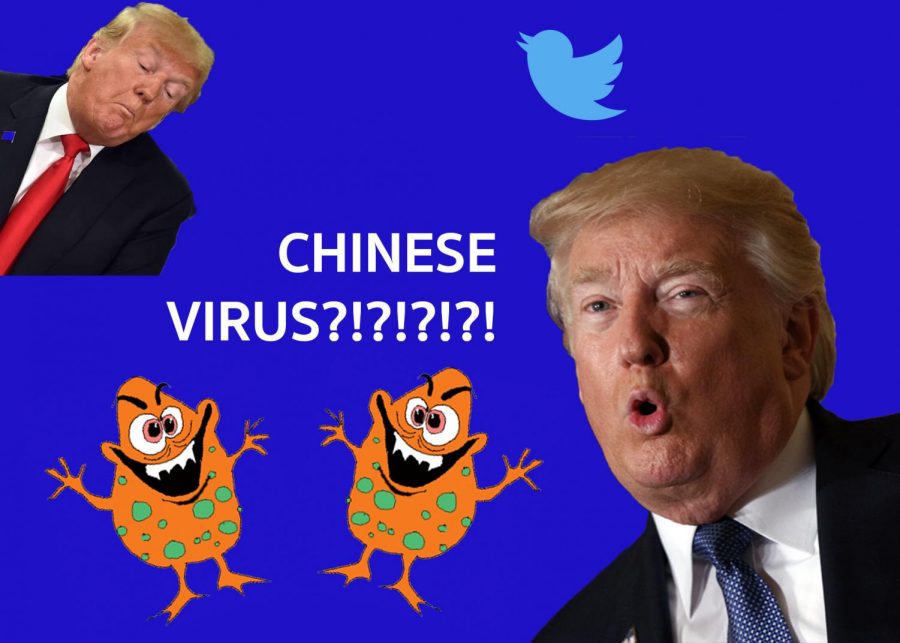 “Chinese Virus”: A new xenophobia is incited against Asians

The stock market is dropping, people are dying, and with more than half of the countries of the world infected, the coronavirus has led to a negative start to 2020. The coronavirus, officially known as COVID-19, is a severe respiratory disease that initially began in Wuhan, China in late December 2019. Unfortunately, as the virus originated in China, the location of its origin has led to increased racism and xenophobic attacks against Chinese-Americans and Asian-Americans in the United States.

While the name COVID-19 was recently coined on February 11th the pandemic has already had a fair share of unofficial nicknames before that, ranging from SARS-CoV-2 to ones like the Wuhan Virus, Kung Flu, and most recently, the Chinese Virus.

The “Chinese Virus” label of COVID-19 gained publicity after President Trump, on March 17th, 2020, posted a series of tweets, where he repeatedly labeled the coronavirus as the “Chinese Virus.” This trend of attaching “China” to the name of the virus is allegedly due to Trump’s anger with Beijing officials who put out a disinformation campaign that called out the American military as the source of the outbreak for the virus.

“The United States will be powerfully supporting those industries, like Airlines and others, that are particularly affected by the Chinese Virus. We will be stronger than ever before!” President Trump wrote on Twitter.

The following day, on March 18th, President Trump continued his attacks by referring to the coronavirus as the ‘Chinese Virus.’

“For the people that are now out of work because of the important and necessary containment policies, for instance the shutting down of hotels, bars and restaurants, money will soon be coming to you,” President Trump said in a tweet. “The onslaught of the Chinese Virus is not your fault! Will be stronger than ever!”

“I will be having a news conference today [March 18, 2020] to discuss very important news from the FDA concerning the Chinese Virus!” wrote another tweet.

After the Twitter feed of Trump went viral, the official news agency of China, Xinhua, published a commentary response to President Trump, calling his use of the “Chinese Virus” a “racist and xenophobic name to cast blame for the outbreak on other countries can only reveal politicians’ irresponsibility and incompetence which will intensify virus fears.”

Furthermore, Geng Shuang, China’s foreign ministry spokesman, said in a recent press conference to urge the US “to correct its mistake and stop its groundless accusations against China.”

In the United States, there has also been an increase in the reported incidents of racism and xenophobia that Asian-Americans have experienced, ranging from racial slurs, physical abuse, refusal of service, and verbal and online harassment because of the erroneous perception that China is the cause of the virus.

Jiayang Fan is a staff writer at the New Yorker and received attention for her experience via twitter:

“Went to take out trash, “Was talking on the phone in Chinese. Man walked by on the sidewalk & in interest of social distancing, I said, ‘sorry, go ahead.’ ‘F*CKING CHINESE,’ he yelled loud enough I could hear him over the aide’s voice on the phone. I turned to look at him to make sure I heard right. ‘Yea,I’m talking to you, Chinese b*tch,’ he continued. ‘YOU’RE  F*CKING CHINESE.’ Man didn’t seem drunk or mentally ill. “

Unfortunately, Fan is not alone in regards to being racially discriminated against for being Asian. According to NBC news, since the inception of the name ‘Chinese Virus,’ on March 18th, there have been more than 650 direct reports of discrimination against Asian Americans. This type of progressed racism towards Asians have sparked much fear and outrage from the Asian American community.

Yet President Trump denied accusations of him being racist. In a recent press conference, Trump continuously blamed China as where the virus originally started in, therefore justifying his ‘Chinese Virus’ phrase.

“I don’t know a lot about the science of coronavirus, but I do think it’s irresponsible for Trump to use this vocabulary when nothing has been confirmed about the origin of coronavirus yet,” Ashley Fu (’20) said.

“I think that Trump referring to COVID-19 as the ‘Chinese Virus’ is simply another component in his xenophobic and, more specifically, sinophobic rhetoric,” said Jonathan Becker (’20). “In 2016, he won by demonizing Latinos. In 2020, he thinks he can win by demonizing the Chinese. It’s awful, untrue, and scary. Nothing can be achieved by focusing on playing the blame game which — by the way — the US would lose since we are the laughingstock of the world for our incompetence in handling this.”

President Trump has begun to realize the harm his fellow citizens are facing due to racism over the misleading characterization of the “Chinese Virus,” and stated his concerns to the Asian American community.

“It is very important that we totally protect our Asian American community in the United States, and all around the world,” Trump tweeted on March 23th, 2020. “They are amazing people, and the spreading of the Virus is NOT their fault in any way, shape, or form. They are working closely with us to get rid of it. WE WILL PREVAIL TOGETHER!”

Trump has also tried to patch up his dwindling diplomatic relationship with China. On March 27th, 2020, Trump used Twitter to announce that he had a “very good” phone call with President Xi Jinping of China and that the two countries are working very closely together to find a solution to the coronavirus outbreak. He also praised China for their strong understanding of the virus, ending his tweet with “much respect!”

Currently, the war against the coronavirus is the number one issue that is being combatted on a global scale. However, the world also has an increase in name-calling, accusations, and physical assaults to those of Asian descent. As the coronavirus pandemic continues to spread, we can only expect the worst.