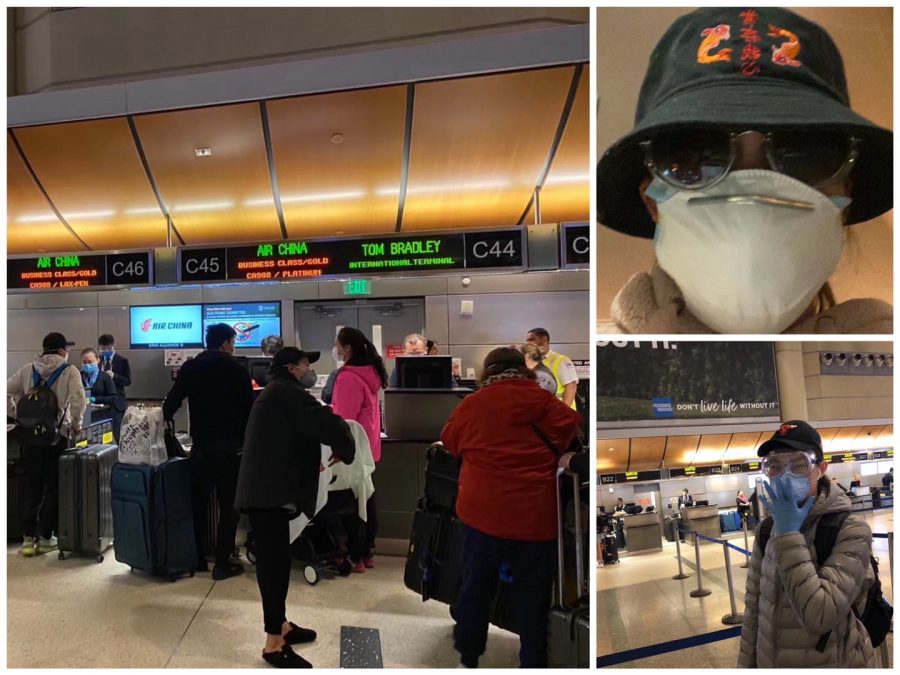 International students gear up for the flight.

In March, as the COVID-19’s spread in China began to slow, frequent arrivals of international flights posed threats to the positive news. New cases were increasing every day, and China was concerned about a possible second outbreak.

By the time Webb announced a campus closure due to the pandemic, China had started enacting stricter policies in order to prevent more overseas cases from coming into China. The policies varied from city to city and changed every day. Several days before many students left for home, Beijing allowed self-quarantine at home. And a few days later, the policy changed to hotel quarantine for all international arrivals because of the increasing cases overseas.

14 days is 2 weeks, 336 hours, or 20,160 seconds — a lot of time. Imagine being told that you have to stay inside a hotel room for this mountain of time with only limited opportunities to open your door every day. This situation became my reality when I returned to Beijing after Webb’s campus closure.

March 19th marked the first official day of my quarantine. After a 12-hour long flight, countless forms, security checks, health check-ups, and waiting, I finally arrived in Beijing Capital International Airport. From there, I was transported by a shuttle bus directly to the quarantine hotel located roughly 10 minutes away from where I live. The trip was really abnormal for me, and, I assume, for most of the people on that shuttle bus as well. I never could have imagined being in this situation. It was surreal to pass by all of the buildings that I grew up around, but not be allowed to step out of the bus to go inside. This situation gave the saying “so close yet so far” a new way meaning.

I had a rather large room with a queen-size bed just to myself, two couches, a table and a shower. Even though they were all together in a single space, it didn’t bother me as much as the unbearable pink wall right behind my bed frame. I spent 14 days trying to figure out why someone would ever paint a wall such an outrageous color in a perfectly normal hotel room, yet I failed to find the answer.

After the initial excitement, I soon found myself filled with despair and annoyance. I could not stop thinking about how there was no way I could leave the room, and how I would be spending 14 days following the same, boring routine. It was painful to stare at the same things in the same room and wake up to a gross-looking, dark pink wall, all while hearing people downstairs chatting and laughing, so far away from where I stood.

Luckily, it wasn’t too long before classes resumed, giving me a change of pace. When I actually connected to Zoom and saw other people, I felt significantly better. I never thought that I would be so happy participating in my Honors Modern Constitutional Debates class at midnight.

Soon enough, I settled down both physically and mentally. I never thought I would appreciate schoolwork, but thanks to the classes and the assigned homework, I was able to adjust to the environment and start being productive again, instead of counting the days left. At the same time, I even began watching “study with me” live streams,  so I could feel like someone else was actually studying with me.

On the other hand, I was able to kill most of the time during the day by watching different Youtube videos in order to follow along the Youtubers’ journeys and explore the outside world. I also rewatched many well-rated movies like Die Hard, The Expendables, and Joker. Even though they weren’t as good or as exciting as when I first watched them, each of them took two to three hours out of my excruciatingly long days.

Before I realized, April 2nd came — my last day of quarantine. Looking back at the last 13 days I had spent in this hotel room, it was a bit unreal that I managed to survive without taking one step out of the room. After spending the last 40 minutes of my quarantine packing up all of my luggage and cleaning up the room, a hotel worker in full protective gear came up, took my temperature for the last time, and cleared me to return home.

It took me roughly 15 days to get from LA to my home in Beijing, and I went through so many extra steps while I was entering the country. At this point in time, it is necessary for us to follow the guidelines issued by the government and fully cooperate, in order to create a safer environment for everyone.

I think it’s very important for us to recognize the incredible effort from the people involved in this process of keeping us safe — government officials, police officers, nurses, bus drivers, hotel workers — everyone battling the virus on the front line. We might be cleared to go home after only 14 days, but they have to stay in the hotel in their protective gear until the very last person gets cleared, which may take up to several months. It is our job to make their job easier by staying at home and recognizing the phenomenal sacrifice they make.

After hours on the airplane without eating or drinking anything, I had finally landed. I held my breath and pulled off the face mask that I had been wearing for twelve hours before quickly putting on a new one. It felt good to be home, but I didn’t feel the same because I still could not reunite with my parents. This strange journey would continue for me, as I entered my two-week-long quarantine.

On the bus to my hotel for the quarantine, I could barely open my eyes out of fatigue and hunger. I leaned on the seat and spent my last bit of energy looking at my beloved city. My exhausted mind was comforted by the drive past my favorite museum from my childhood, the familiar skyscrapers, highways, and even the grey sky. Although I knew that I had to spend 14 days in a hotel room alone, I felt safe knowing that I was home and would no longer worry about being infected.

As a boarding student, I am used to living away from home. Even before being quarantined, I was the last boarding student to leave Webb and slept in the empty dorm for days. Every day, I bid farewell to one friend after another, until my brother and I were the only students left on campus. Even during these strange days, I had the company of my dorm room, my brother, dining hall staff, and the familiar Webb campus. Webb has taught me how to be independent, but I had never lived in a room alone without any other human company for two weeks.

This new experience was daunting, but it ended up becoming a time for me and many others to relax, think, start doing what we want, and, of course, simply waste time.

Every day, I would lean outside the windows to feel fresh air blow through my hair as I waited for the day I could finally step outside. I loved knocking on the wall my brother and I shared, so he could knock back because this was one of the few things that made me feel less lonely. Every morning, as an asynchronous student, I was busy watching video recordings and completing assignments. In the afternoon, I could finally start reading my own books and doing what I wanted. I created a daily routine of working out at 4 p.m., and I appreciated the exercises and good feeling after the workout.

“I thought it would be extremely boring because I couldn’t even leave the space,” said Nancy Li (‘20), a student quarantined in Shanghai. “However, I have found it surprising that there are so many fun things you can do in a room. Watching YouTube videos, going on virtual college tours, talking to friends and family, playing games, doing makeup and washing away all of them and doing a different look, painting… Just to name a few.”

I am an optimistic person, and I am glad that even during difficult times like this, with home so close yet far away, I could use the time to think, adjust myself, and start the things that I have always wanted but had been procrastinating.

“I learned that sometimes things change really fast, and there is no time to process,” said Jimmy Feng (‘21), who was quarantined in Shenzhen. “We have to be flexible…This will be a very unforgettable experience for me, given that I have never experienced anything like this before, and it will be something special for our generation.”

Surviving in a hotel room alone for 14 days was not as difficult as it was long, since there was a bed, a shower, daily supplies, food, sunshine, and things that could make me happy. A good mindset is a game-changer in uncertain times, like knowing that the day of true homecoming will eventually arrive. Together, we can work towards a safer community with no more fear of infection.