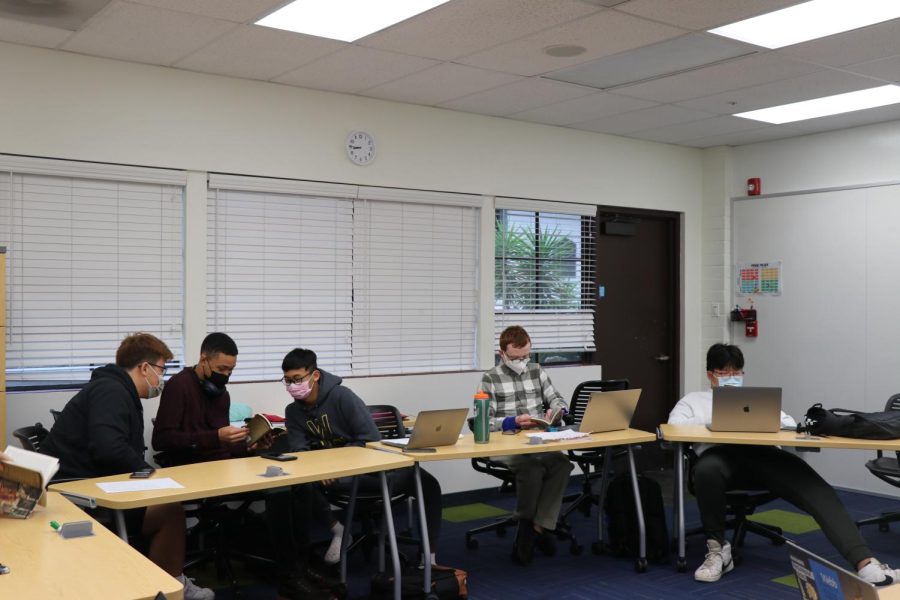 Webb is often very open with their goal of academic equity amongst their students. Yet each year, Webb decides to renew a dated practice that perpetuates a gender-based division in education. Here at Webb, freshman and sophomore core classes are still split by gender.

It seems outdated as, in the past few decades, schools across America have moved away from single-gender classes and toward coeducational ones, but Webb has stuck by the practice since its integration in the early 1990s. With wisdom from American psychologist Leonard Sax and the Gurian Institute, Webb’s administration made the move toward single-gender classes and has not looked back since.

“The administration at the time talked to some neuroscientists who were very well-versed—for that time—in single-gender learning and, based on their research, thought it would be interesting to have a blend, or a kind of continuum, from single-sex classes to co-ed classes during the course of a student’s time at Webb,” said Taylor Stockdale, Head of Schools. “We had a science-based rationale for why we decided to explore this idea of a single-gender, or single-sex, to coeducational continuum within the educational program.”

Even as a myriad of schools move away from this style of learning, Webb remains hesitant to make the switch. Michael Hoe, Director of Studies, recognizes the strengths and weaknesses of the current academic structure.

“Once students learn to have deep and insightful conversations as underclassmen, they can go on to respectfully disagree and engage in dialogue constructively as upperclassmen,” Mr. Hoe said.

According to Mr. Hoe, in single-sex classes, students have an inherent safe space to talk about the biases that people bring to certain types of conversations, such as those based on gender identity. As a teacher, Mr. Hoe has also had firsthand experience interacting with and guiding underclassmen. He mentioned the numerous times he noticed his students in single-sex classes carry out constructive discussions with each other, pointing out how students felt safe enough in single-sex classes to express their own biases and acknowledge those biases because they felt their peers shared their point of view.

Of course, Webb students and teachers alike have undoubtedly considered the disadvantages of a partly single-sex academic program. However, new questions are raised regarding the differences in classroom experience present in Webb’s single-gender underclassman classes. To explore this idea further we decided to conduct an experiment. Sitting in on a VWS and WSC American Idea class, both taught by Dr. Lauren Hartle, humanities department faculty, we recorded our findings. Our observations can be found at the end of this article

First, we must address the uncomfortable, but essential question: is one school at Webb “better”—academically or maturity-wise—than the other? Within our testimonies, one might look more attractive than the other, but that does not necessarily attest to the academic or maturity level of each class.

We pose the question of why Webb is so loyal to this academic structure. Seeking some view into the school’s future, we asked Mr. Stockdale this question.

“Since [the early 1990s], I think we have loosened up quite a bit, and who knows for the future?” Mr. Stockdale said. “The thing is, Webb keeps evolving. It keeps morphing and changing according to what we feel the best practices are in the current day for students, so nothing is set in stone in terms of how we are going to do things in the future.”

It seems that even though Webb is not opposed to changing its unique—and often controversial—core classes system in the future, it is unlikely that this change would occur within the tenure of current Webb students. Nevertheless, Webb will continue trying to keep students’ best interests in mind when organizing their education plans.

According to the student handbook, “Webb believes that a student’s determination of gender identity rests with the student. In keeping with the structure of the two schools, this gender identity will be utilized to assign students to school-based residential and academic programs.” It goes on to say that an administrative team will assist students in designing a personalized “gender support plan”.

Reflecting on both of our experiences in core classes that were not our own, one thing is certain: single-gender classes create very different learning environments for Webb students. Although different, they are similar in the fact that neither learning experience really feels complete. Each missed the additional perspective that comes with a coeducational class. But then again, is a coeducational classroom really complete either? From our shared experiences in coeducational classes at Webb, whether it be in a language, math, or arts class, we can see that there are certainly still gaps in the curriculum.

While Webb does its best to provide a high-quality educational experience for its students, there is always room for improvement in the curriculum and core classes. Webb will continue to work with its administration and outside resources to tweak and build upon the unique education system it has built, in an effort to improve the Webb experience for the entire community.

Come 10:30 A.M. when I entered Dr. Hartle’s C block American Idea class, I could immediately tell that I was in for an experience that I have never had before. Even before the start of the period, the class was lively and engaged—something rare in the WSC classes I have been a part of.

As the lesson began, this level of engagement persisted, and every student willingly contributed to the general discussion at some point during the class. In a WSC class, I would find this outlandish, as most discussions are less balanced and dominated by a smaller portion of the class.

On the other hand, from my short time sitting in a VWS classroom, I noticed that the learning atmosphere feels more relaxed than I am used to. The students seem more comfortable with each other in the classroom and even have some inside jokes. Also, when a student on Zoom asked for photos of the board, another student was quick to help.

In fact, when any student made an incorrect statement, they were promptly, but respectfully, corrected, and the class moved on. In a WSC class, students have received a harsh reaction for the same. Additionally, any disagreement I witnessed was organized and civil.

Dr. Hartle and her VWS students seemed to have a lot of mutual respect, and she could easily reel them in if the discussion veered away from what was intended. Her relationship with her students feels more casual than that of a WSC class, but in a good way.

During discussions, VWS students and WSC students also focused on different subjects. In my B block WSC American Idea class, much of the discussion was allocated to Kate Chopin’s literary mechanics in The Awakening. The VWS students seemed to lean towards discussing a portion of the book that focused on gender roles and the significance of women in society.

There were a few times, sitting in the classroom, when I was surprised by the VWS discussion. Many points that my teacher had to intentionally bring up in my WSC class were brought up naturally in the VWS discussion. I was also surprised by the amount of notetaking in the class. Many students took rigorous notes, a sight that is not too common in a WSC class.

I would say that there are good things going on in VWS classrooms in terms of a healthy learning experience. The atmosphere was refreshing; I was certainly not used to learning like this. It was such a different environment from what I was used to, but it was strangely comforting.

On Wednesday, January 19th, I went into Dr. Hartle’s F block American Idea class, with the intention of listening to some of my peers from WSC discuss a book that the entire sophomore class was reading.

The topic of the day’s discussion would be a part of Kate Chopin’s The Awakening, a classic novel published in 1899, which is considered an “early vision of women’s emancipation.” I had attended an earlier block of this same class with Dr. Hartle the week before, so I assumed the discussion would follow a similar path.

However, I was very surprised by the fact that the WSC sophomores did not have much to say about the book, or on the topic of discussion in general. Dr. Hartle asked the class at the beginning of the block what they thought about the reading that was assigned for homework, and to me it seemed that the class took a surprisingly long time to respond. It was especially surprising in comparison to my own Society and Idea classes, where more often than not, my class would have a lively discussion until we were interrupted by our teacher.

As the class continued through choppy conversation, I realized that certain questions from Dr. Hartle elicited a stronger reaction from my WSC peers than others, even if only two or three of the same people responded each time.

Moreover, there seemed to be a few people that spoke for the majority of the discussion, not leaving much room for others to add constructive points. It felt very much “everyone for themselves”, where even though everyone was physically present in the classroom, nobody was really following a particular thread in the discussion. I was also surprised at how passively a lot of students responded to Dr. Hartle’s questions, since I came in with the assumption that WSC students would be more opinionated or argumentative.

I remembered something that Mr. Hoe had told me when I spoke with him about Webb’s unique (partly) co-ed program. He explained to me why Webb decided to only segregate classes for underclassmen, and what research Webb relied on to create their split academic program.

“In general, students who identify as female are more intellectually mature at a younger age,” Mr. Hoe said, “At least, that’s what the national data says.”

At first, I took this information with a grain of salt, as I assumed that the “national data” could very possibly be outdated and already be replaced by newer, more accurate studies. However, the longer I sat in Dr. Hartle’s class, the more I realized that there were clearly differences between the VWS and WSC classes, both in our academic interactions and thought processes. The real question is whether these differences ultimately lead to a constructive academic learning experience for everyone.