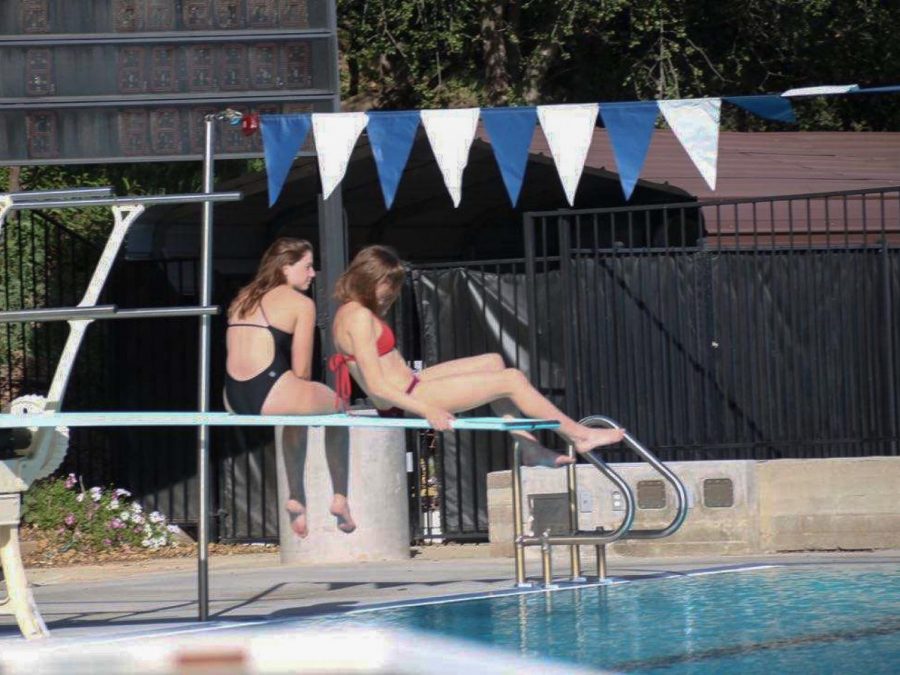 Livia Hughson (‘21) and Kennedy Becher (‘21) spend time on the diving board before swim practice.

After completing two seasons of afternoon activities, student athletes were excited to compete and train for their upcoming spring season. Starting off with many wins and on the track to a successful season, athletes prepared for badminton games, track meets, tennis matches, swim meets, and baseball/softball games. Some athletes even trained pre-season and participated in activities such as baseball clinic, functional fitness, and other activities to prepare for their sport.

“I felt very disappointed when I found out the season was over,” said Ron Smith, head softball coach. “I felt that we would have had another great season. Everyone was really working hard and we were looking like a legitimate team. I felt by the time playoffs began, we would have been at the top of our game and could have made it to the finals.”

At the beginning of the pandemic, it was hard for athletes to believe that a virus so far away could ruin their entire season. However, as the virus spread, the threat to students increased, and officials decided to cancel all spring sports and to shut down schools to prioritize student safety.

Canceling spring sports took a toll on all student athletes; however, COVID-19 affected seniors the most as they are no longer able to play one final high school season of the sport they love.

“I was overall shattered when I found out the season was canceled,” said Cayden Lazier (‘20). “I’ve been training daily with weight and fielding at a facility known as PFA, and I spent countless hours preparing for the season. I was looking forward to the league season and hopefully a repeat of league championships. This is probably one of the most painful parts of our senior year, not only athletics, but graduation, prom, and everything else being postponed or canceled.”