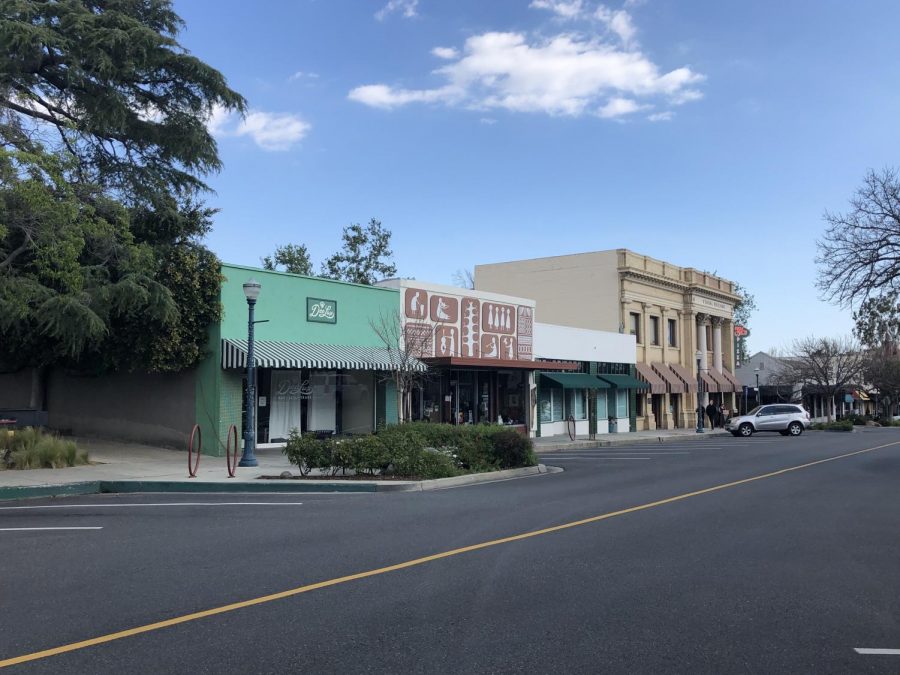 The normally bustling Claremont Village is empty on Friday March 27, 2020. Stores are closed. Some restaurants are offering take-out and curbside pick-up along with “bake at home” options.

Claremont, California gets quieter as residents practice “Safer at Home”

The Village is empty. The seven thousand college students that normally bustle around the city are nowhere to be found. The popular trails leading into the foothills of the San Gabriel Mountains are barricaded off. Claremont looks like a ghost town as residents are ordered to stay safe at home.

Shortly after Webbies departed campus, the City of Claremont got a shock too: a “Safer at Home” order was announced by Eric Garcetti, mayor of Los Angeles on March 19, 2020. The order requires that non-essential businesses come to a halt and that residents stay home.

“Claremont just feels emptier,” said Claremont resident Livia Hughson (‘21). “There are no excess college students running around, and the campuses look kind of like a ghost town.”

The popular Claremont Village is also empty as many stores have had to close their doors for the time being. The weekly Claremont Farmers & Artisans Market has stopped operating for now.

“Normally on weekends, the Village is bustling with people who are eating lunch with friends, shopping, or just going out,” said another Claremont resident, Sofia Centeno (‘21). “Without all the people, the Village definitely has an abandoned vibe.”

Known informally as the city of “Newly Weds and Nearly Deads,” Claremont is home to a particularly vulnerable group to COVID-19 — senior citizens. From the 2016 Census, 16.6% of Claremont residents are 65 years of age or older. To help the senior citizens, the community is coming together; City Staff and local churches have organized occasional contactless lunch pickups.

The Claremont Hills Wilderness Park and surrounding trails will be closed until further notice. The City of Claremont notes the closures of the popular parks due to the high number of people refusing to adhere to social distancing.”

“With the trails being closed off I find it difficult to connect to the community or to become one nature,” said Livia. “Walking on the streets just isn’t the same.”

While city parks and trails are closed, residents are still encouraged to go on walks while practicing social distancing.

“I have enjoyed seeing so many families out walking and spending time together in nature,” said Emma Holliday (‘22), who also lives in Claremont. “The streets are more empty, but people are still going out.”

“I have noticed a lot of people out on walks, runs, and bike rides,” said Sofia. “Claremont still feels alive. I have been spending free time with my sisters outside enjoying the fresh air.”

For now, the City of Claremont will remain under the “Safe at Home” order. While the streets are emptier and the Village is quieter, the spirit of Claremont is still bustling.